I recently bumped into Sharon Cupp Pennington online, and was impressed by her review-writing skills. Matter of fact, I asked her to review my upcoming release, The Seacrest. She kindly accepted, and after we chatted for a while, I realized that many of my writer friends clamor for good reviewers to take a look at their work. Sharon has graciously allowed us to post an example of her work here on MB4, and also gave me permission to provide her contact info and the genres she likes to read!

I absolutely adored the following review - it's so beautifully written, now I want to go read this mystery series myself! I guess that's the sign of a good reviewer, if they can get readers to go check out the books they loved, we're all happy, right?

Have fun reading, and don't hesitate to contact Sharon, at the email address listed below. ;o)

Rules were absolute; that’s the way she was raised. If she followed the rules, she’d be just fine . . . 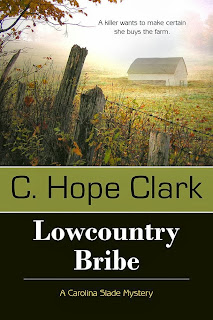 Uh-uh, honey. Not this time. Not for Carolina Slade, County Manager, United States Department of Agriculture. Slade's professional life has blitzed from the structured normalcy of bailing out farmers with federal loans to head-spinning chaos faster than a filibustering politician can shout “pork barrel spending.” From the splatter of employee Lucas Sherwood’s O-positive blood on his office wall -- an apparent suicide -- to pig farmer Jesse Rawlings with his unabashed bribe to gain possession of an adjacent farm, author C. Hope Clark will have readers fretting over and cheering for her gutsy protagonist in LOWCOUNTRY BRIBE (BOOK ONE: A Carolina Slade Mystery).

Doesn’t sound like enough conflict for you die-hard mystery devotees yet? Turn another page. With the deftness of an all-star hitter, Ms. Clark brings in the bickering, grudge-holding, soon-to-be-ex husband and a couple of gotta love’ em kids inching their way into puberty.

Oh, and let’s not discount Senior Special Agent Wayne Largo, who arrives in his white Impala toting a big Smith and Wesson .357 and even bigger government credentials. Did I say white Impala? Dark hair, broad shoulders, trim waist? A drawl that has Georgia peaches dropping from the trees?

Murder, kidnapping, edge-of-your-seat mayhem and sizzling romance done Southern style, C. Hope Clark’s debut novel packs it all into 272 pages. And then some. This author drops readers straight into the story’s heart with her wonderfully painted visuals of the South Carolina coast, her smart and snappy dialogue, in-depth characterizations, and infinite plot twists and turns. Protagonist Slade loses ground and gains it back again and again in LOWCOUNTRY BRIBE, but she never stops trying -- and she never loses the stranglehold on integrity that’s helped her succeed in a man’s world. In a word, she's likeable. (I guess that’s two words.)

This is a good one, folks. I’d tout LOWCOUNTRY BRIBE as a page-turner, but readers will recognize this after the first chapter. I’m giving Ms. Clark’s effort five sterling stars, and you can bet I’ll be watching eagerly for the second installment in her Carolina Slade mystery series. Maybe a third installment, a fourth?

About the author:  The granddaughter of a Mississippi cotton farmer, C. Hope Clark holds a B.S. in Agriculture with honors from Clemson University and 25 years experience with the U. S. Department of Agriculture. She currently manages FundsforWriters.com, her weekly newsletter that reaches almost 50,000 writers to include university professors, professional journalists and published mystery authors. Ms. Clark is a long-term member of SC Writers Workshop Association, Sisters in Crime and MENSA. To learn more about this talented author and her future endeavors visit www.chopeclark.com.

About the reviewer: Sharon Cupp Pennington's short stories have appeared in numerous online and print venues, with anthology contributions to The Rocking Chair Reader in the Coming Home edition (2004) and Family Gatherings (2005), A Cup of Comfort for Weddings: Something Old, Something New (2007), and Good Old Days Magazine (March, 2007). Her debut novel, Hoodoo Money, and the second installment in The Stolen Nickel Series, Mangroves and Monsters, were released in second editions on September 21, 2013. She resides in Texas with her husband, Wayne, where she is working on her next novel.

Note from Aaron: Sharon is accepting review requests!! If you are seeking a review and fit into her genres, give her a try! (no guarantees she will accept, of course, but it can't hurt to ask!)
Sharon's Book preferences: I prefer reading contemporary novels - mystery, romantic suspense, suspense, thrillers, adventure. I don't go for mushy romance. I have reviewed one horror novel (not all that horrible) and several historical mysteries but these would not be genres I would seek out. If this helps, my favorite authors are, at the moment, James Rollins and the duo of Douglas Preston and Lincoln Child, and James Patterson - but only his Alex Cross series.
Here's my website address: http://sharonpenningtonwrites.webs.com/ 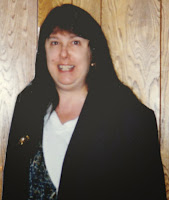 Fantastic review! Gosh, her prose is so lyrical...while reviewing someone else's book! Thanks a bunch!

Hope, I know, right? That's why I wanted to share this review. It's a review that DESERVES a review, LOL! Loved it! Sharon is reading my book, The Seacrest, now and I'm looking forward to seeing her response on Amazon soon. ;o)