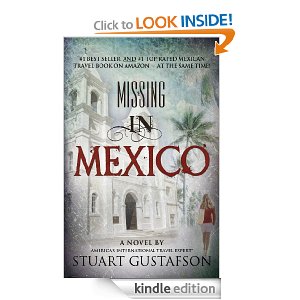 Missing in Mexico is a fine first novel, filled with a genuine sense of place and easy-to-read prose. Many debut novelists fall prey to overwritten prose with too many adverbs or adjectives, excessive “telling,” and laborious narratives. Mr. Gustafson has, for the most part, avoided those traps, and does a good job of simply telling the story in a natural style. Gustafson also includes a bit of education at the beginning of each chapter, where he provides us with a simple Spanish lesson. I enjoyed this aspect of the novel because although I’ve studied French and German, I’d only taken on semester of Spanish in high school and the memory-jogging was fun.

When Robert and Tina Johnson visit Mexico with their daughter Sarah and her best friend Mary, they had no premonition of the impending horror they were about to endure. When the joint vacation is over, they leave the girls (both college freshmen) to enjoy a few extended days in Los Cabos, an area they deemed quite safe, knowing the girls needed a little time to unwind before returning to college after Christmas break.

When Mary gets on the plane with Sarah right behind her, she’s shocked when the girl doesn’t show after making a beeline for a last minute purchase. The plane leaves without Sarah, and the mystery begins.

Did Sarah miss the plane on purpose? Or did someone kidnap her? Is she alive? Or dead? The most important question, however, is whether Stan Walkorski—the private eye the Johnson’s hired—will find the girl in this strange but beautiful land.

The author has achieved a great start to his series here, buoyed by his extensive knowledge of the land of Los Cabos, Mexico. While his travel knowledge sometimes crept into the story a bit too often to maintain taut suspense (there was a long section about the art district that was interesting but not crucial to the story), in general the tension was well-maintained.

Gustafson makes his readers care about Sarah and her parents, who suffered dreadfully and imagined the worst every waking hour of their days that stretched from weeks to months; and also about the protagonist (Stan). I couldn’t help but wonder, however, why he became involved with a woman he met on the plane who originated from the Los Cabos area, and then just let the woman go without really fighting to find her. (I really liked her and was very disappointed when that didn’t work out and he started seeing a new woman he also met on the plane.). In real life, things like this do happen, so I chalked it up to the author’s right to choose.

As a last note, I do believe the title is a real winner – how can anyone resist a mystery named “Missing in Mexico?” I’ll be interested to see how this author progresses in his travel mystery series, and where he’ll take us next!