Writing the Book Only You Can Write by Pat Bertram 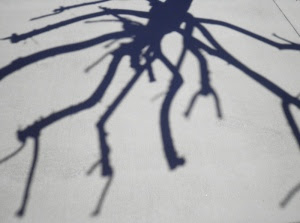 “I really believe there are things nobody would see if I didn’t photograph them.” –Diane Arbus, noted American photographer

Out walking the other day, I noticed an incredible shadow of a tree on the sidewalk, and I had to stop and take a picture. I happened to pass at just the right time. In a few minutes, the sun would be in a different position, clouds would filter the sunlight, and the lines of the shadow would blur. But  for just a moment, there it was — stark and beautiful. Since I happened to be carrying my camera, I am not the only one who saw that shadow — you can see it, too.

During my two years as a published writer, I learned that if you wish to be a selling author, you need to pick a specific, recognizable genre, and you need to develop a series character in that genre who is so compelling people will be waiting for your next book. Readers who come late to the series go back to read earlier books, and so sales take on a life of their own, each book helping to sell the others. This was a painful lesson, because I did not do that. Each of my books is a stand-alone novel without a series character, and each straddles a shadowy line between genres. Instead of a series that helps promote me and my oeuvre, I have to start over each time a new book is published, promoting each book individually.

And yet  . . . I can’t feel too badly about my stand-alone, genreless books. They would never have been written if I didn’t write them. Only I could have presented that particular world view, created those characters, told those stories. Maybe my books will never find a strong readership, maybe I will go down in obsucurity, but in those books are things no one would ever see if I hadn’t written a word photograph. Like my lake of flowers in Light Bringer: 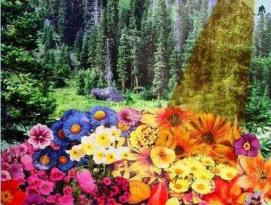 Becka kept running, needing no footpath to lead her to their destination. She could feel the music tugging at her, guiding her, singing her forward.
At first a faint red trumpeting, the music swelled into a full orchestra: orange church bells, yellow bugles, green violins, blue flutes, indigo cellos, violet woodwinds.
Beneath it all, she could hear the grasses murmuring, “Hurry, hurry.”
And then there it was, spread out before her in a shallow thirty-foot bowl. A lake of flowers— chrysanthemums and tulips, daisies and daffodils, lilies and columbines and fuchsia—all blooming brightly, all singing their song of welcome.
***

Light Bringer: Becka Johnson had been abandoned on the doorstep of a remote cabin in Chalcedony, Colorado when she was a baby. Now, thirty-seven years later, she has returned to Chalcedony to discover her identity, but she only finds more questions. Who has been looking for her all those years? Why are those same people interested in fellow newcomer Philip Hansen? Who is Philip, and why does her body sing in harmony with his? And what do either of them have to do with a shadow corporation that once operated a secret underground installation in the area? (Light Bringer has been called a speculative fiction thriller, which is as good a genre description as any.)

Pat Bertram is the author of Light Bringer,  More Deaths Than One, A Spark of Heavenly Fire, and Daughter Am I.
Posted by Aaron Paul Lazar at Wednesday, March 07, 2012

Well said. I have also told people to write YOUR story, the only one they can write. Nice to know others feel the same way. And I loved the description of the lake of flowers. Even without the additional picture, I saw the scene play our in brilliant color.

I loved Light Bringer, Pat. And you know, there's always the other side. I write only series, and keep thinking maybe I should write the great standalone novel that will be my breakthrough book. LOL.

Your field of flowers segments was one of my favorite scenes from Light Bringer, by the way. ;o) I also loved all your other books and look forward to your next. You are a great talent.

From Pat Bertram (who is having difficulty posting in the comments here today...)

"That description of the lake of flowers was one of my favorite bits of writing. It was amazing how much research went into that one passage, and very gratifying that I was able to put my vision into words.

It's always a joy to be here at Murder by 4, Aaron. Thank you for having me.
Thank you."

Pat Bertram
author of More Deaths Than One and A Spark of Heavenly Fire, available from Second Wind Publishing, LLC
http://patbertram.com

Great to have you on the blog Pat! Love the passage you posted. I am going to go out and get your books soon- trying to knock down my current to be read stack - a never-ending effort!