How Will it End? by Warren Adler 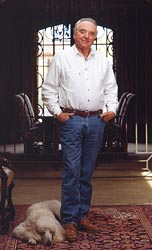 
Today is Warren Adler day! We will feature this well-known author of books like WAR OF THE ROSES and RANDOM HEARTS on the first Friday of each month throughout 2012.

Please help me welcome this most generous bestselling author today to Murderby4. Warren, welcome and thanks for sharing your insight with our readers.

How Will it End?
copyright 2012, Warren Adler

People are always asking me whether I know the ending when I begin to write a novel. I imagine many writers of fiction are asked the same question.

It brings to mind what one of my friends, Rod Thorp, used to say. Rod and I and a group of other novelists and at least one screenwriter were part of a luncheon klatch that met every month to shoot the breeze and discuss this and that, life in general and the joys and perils of the writing trade.

Among the group during my tenure were Andy Kaplan, Jonathan Kellerman, Sid Stebel, Mann Rubin, Brian Garfield, and Ib Melchior and, of course, Rod Thorpe.

During my six full-time years in LA, it was one of the highlights of my stay and turns out to be what I miss most at my west coast sojourn. Occasionally when the timing is right and I am in LA, I join the group and take my place in its conversations.

We started the group in the late-eighties and it is still going strong, although some of the original founders have been replaced by others. None are retired from the writing game, but then, as we have learned, only something extremely dire and disabling will ever stop a real writer from writing. Retirement is never an option.

Rod, who died in 1999, one of our founders, was truly a real writer. He wrote what are now described as thrillers and they were wonderful novels with great characters, compelling stories and lots of insight and wisdom. His book The Detective was a roaring bestseller, which he wrote when he was just under thirty and became a film with Frank Sinatra and Lee Remick. One of his novels, Nothing Lasts Forever, was produced under a changed title, Die Hard, which made millions for lots of people, although I don’t think Rod ever received his just financial rewards, which is the typical fate of most original writer creators in Hollywood.

One of our group members, the brilliant and prolific Brian Garfield, often regaled us with his Hollywood war stories, particularly about Death Wish, based on his book that became a giant franchise.

Our conversation was often light-hearted camaraderie, but embedded in our exchanges we often offered each other what in hindsight were some golden nuggets of insight and wisdom, the kind that clutches the memory for a lifetime, which brings me back to Rod Thorp. He was the kind of writer that sprang out of working class New York and truly understood the core idiom of that life, which spawned so many terrific fiction writers. He had taught writing and having worked at his father’s detective agency he knew the grit and motives of the secret lives of criminals and dissemblers that gave his characters such heft and emotional truth.

Rod’s answer to that question posed at the beginning of this essay about endings was this: “If I knew the ending in advance I wouldn’t be interested in writing that novel.”

For me, as it might have been for others around the table, he had hit the nail on the head. I, too, could never stick with a long work of the imagination if I knew the surefire ending in advance.

This in no way is meant to be critical of novelists who outline carefully and follow a template to construct their story and proceed to a pre-arranged goal line ending. I’m sure many good novels are turned out using that method.

But for Rod and me, writing a novel is like watching a parallel life unfold. Characters come alive in our imagination, they interact in an imaginary environment. They love, hate, observe, think, talk and act. The novelist must know and report his or her character’s thoughts and what motivates their relationship with others.

To the creator, these characters become real, full-blooded, three-dimensional. The creator knows their mind, their thoughts, their inner life, the complicated clockwork behind their motives as they seek their destiny, perhaps love, money, fame, forgiveness, vengeance, ecstasy, or the thousand other needs of the human self.

Like the life we live in our reality, no one can predict what will happen next. The creator, like those readers who enter his or her parallel world, is just as eager to know what will happen next as he presses on with his story. Sometimes the characters who live in the mind of the writer will do exactly the opposite of what might have been expected when the story began.

They come upon obstacles, detours, make wrong turns, disastrous decisions. As a result, endings change. An apt image might be the creation of the Frankenstein monster, who provides the ultimate unpredictable outcome.

In the end, the writer becomes a slave to his character’s motivations. Like real people they change their minds, their point of view, their emotional responses. They cannot be contrived. If they are, the reader will catch on quickly. So it is with the writer. Without authenticity the story is without truth or substance.

For many who ask this question, such an explanation might seem baffling. For the writer the special reward, as it is for the reader, is “finding out,” discovering how this story will end. The characters, as they follow the intricacies of the plot that is hatching in the mind of the writer must be people who have engaged the reader (and the writer’s) interest or the exercise is for naught. If either the writer or reader knows in advance what will happen the thrill of finding out disappears.

I know this is what Rod meant and I have tried to articulate it to students in creative writing seminars that I have taught and to the casual reader who often asks this question. Some have been confused by this answer. Some have understood without question.

My musician friends tell me that this is how Jazz is composed. Perhaps. I don’t know.

But, after all, there are lots of mysteries inherent in the compulsion to create art, in this case the novelist’s art. Ask an artist why he or she does anything to create their art and they will come up with explanations that often baffle the questioner.

Especially if he or she must answer questions like: Do you know how your novel will end in advance?

***
Warren Adler is a world-renowned novelist, short story writer and playwright. His 32 novels and story collections have been translated into more than 25 languages and two of his novels, The War of the Roses with Michael Douglas and Random Hearts with Harrison Ford, have been made into enormously popular movies, shown continually throughout the world.

Today, when not writing, Mr. Adler lectures on creative writing, motion picture adaptation and the future of Electronic Books. He is the founder of the Jackson Hole Writer’s Conference and has been Chairman of the Board of Trustees of the Jackson Hole Public Library. He is married to the former Sonia Kline, a magazine editor. He has three sons, David, Jonathan and Michael and four grandchildren and lives in New York City.
Posted by Aaron Paul Lazar at Friday, March 02, 2012

Gosh, it has been a terribly full weekend and I am just now able to comment. My apologies, Warren.

I also write the ending as a natural outcome. It changes and evolves as I go along and I just don't worry about the ending too much until it is time.

Thanks for your great insight!

Hi, Warren. I loved this article, not only because I could totally relate to not knowing what comes next in my books, but I thoroughly enjoyed hearing about your writing group. To think of all the times we've watched the Die Hard series (my wife loves them), and to imagine all the views these movies have received and still receive through cable reruns - it just breaks my heart that Mr. Thorpe didn't see the full benefits of his creation.

Thanks for sharing this amazing testimonial. I, for one, am glad you'll never retire from writing - what a strange thought, huh? Love your books so much and am always looking forward to the next one.

Thanks for guest blogging with us!

Outstanding article Warren, sorry for being late to the party. I have never known the ending of the story until my characters get there. And I have also noticed that when you get to the end of the story, you just sort of "know" it's time to wrap it up. Thanks so much for your continued excellent contribution to the site.