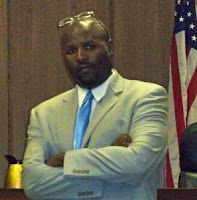 copyright 2012, Chris Shella
As a criminal trial lawyer, nothing irritates me so badly asto see fake non-convincing law scenes on TV or in the books I read. I know tothe average layman, it seems real, but to someone who is in a courtroomeveryday it’s irritating and annoying. I tell you my annoyance get even worsewhen it is a corporate lawyer or a civil litigator trying to detail a murdertrial or even a plea bargain. Those guys detailing a criminal case is akin to anelectrician telling you how to do your plumbing. They may have a general idea,but you wouldn’t want to risk your house on their opinions. You may ask, whatare my bona fides to make such assertions? I am a criminal trial lawyer who hastried more than 100 major felony jury trials and handled more than 50 murdercases in New York, Maryland, Washington, D.C., and North Carolina in both stateand federal court.
Whew, now that I have that off my chest, let me give thethree ways I advise that you can insert convincing legal work into your work offiction.
Convincing legal work can make or break your legal thriller.If readers are truly immersed in your work they can see hear and smell thecourtroom you put in your work. If something doesn’t ring true or soundsunauthentic, readers can end up getting hung up on a fake detail that makesthem distrust your work and therefore dislike it. Now I know it doesn’t makesense to go to law school(incurring hundreds of thousands in debt) and trycases for about ten years until you understand criminal trial work but here area few short cuts:
1.     Sit your butt in a courtroom for a month to two months and watch what goes onthere.  I know a lot of folks think they can just ask there cousins’ brother’s friend about what happens in court, but there is nothing like seeing it yourself. Sitting in a courtroom you will see the tension in the relationships that is rarely portrayed in books. Sitting in the courtroom wil lallow you to observe the nuts and bolts of the criminal practice. No one can explain a plea and the intricate dance it is unless you see it yourself. From the clerks, to the police, to the lawyers, and defendants, it is almost a ballet how they interact.
2.     Read anecdotes and the books of famous criminal trial lawyers. Dick Deguerin, Racehorse Haynes, Johnnie Cochran and others have all written autobiographies that talk about their cases and lives. Reading these books is a great starting place. All of these lawyers talk about their cases and how the cases they tried proceed.

3.     Talk toformer defendants. Some of the most informed people on how I justice systemworks or doesn’t work are those who have been punished and incarcerated. Idon’t mean the jailhouse lawyers but maybe your cousin who went to jail for DWIhas more insight into the law than the real estate closing lawyer who you knowpersonally. Criminal defendants who have been convicted and then exoneratedwould be even better. They can tell you about the mechanics of a legal systemthat victimized them. You would be surprised about how much of the law isunderstood by someone who has been convicted and filed their own appeals and filed writs of habeas corpus  out of necessity because they don’t want to spend the restof their natural lives in jail.
I know that this isn’t all inclusive but it is guaranteed togive you a better sense of the criminal justice system than “Matlock” or “TheFirm”. This advice will give your work the air of authenticity that is thehallmark of interesting writing. These shortcuts aren’t exhaustive but theywill give you a definite start of making your legal thriller pass the smelltest.
***
Author Chris Shella is a graduate of Morehouse College and the University ofTexas Law School and started his legal career in Long Island, New York at theNassau County District Attorney’s Office. He is admitted to the practice of lawin New York, Maryland, the District of Columbia, and North Carolina. Shella isalso admitted to the federal court in the Eastern District of North Carolina,the Middle District of North Carolina, U.S. District of Columbia, the FourthCircuit Court of Appeals, the District of Columbia Circuit Court of Appeals,the Eastern District of New York, and the Southern District of New York.He isalso admitted to the Bar Of The United States Supreme Court. He and his caseshave been covered on Court TV, CNN, and in the New York Times, and other mediaoutlets across the globe. He has represented everyone from lawyers to majordrug traffickers to a serial killer in Baltimore. His two most famous case arethe Vegan Baby Case and his defense of the Duke Lacrosse Case accuser for thealleged murder of her boyfriend.
Chris now resides in Durham, North Carolina, with his wife and son.

His latest book is the legal thriller, ReasonableFacsimile.
You can visit his website at www.reasonablefacs.com.

Can Jasper Davis pull himself from his life of loose women, liquor, andgeneral debauchery in enough time to win a murder case and possibly save hisown hide? Jasper Davis is a criminal trial lawyer in Baltimore who has slowlybut surely become like the drug dealers and lowlifes he represents. He spendsmore time with hookers than clients and more time drinking Jack Daniels than studyingthe law books. Simply put. he is a shade of his former self. In ReasonableFacsimile, Jasper is in the middle of a first degree murder trial when hebecomes the suspect in the murder of a DEA agent who was set to testify againsthis client. Jasper is so far gone on women and liquor he sees his trial skillsdeteriorate right before his eyes. Jasper is confronted by the situation is hegonna continue to be a reasonable facsimile of a human being or is he gonnabecome the man he once was.
Posted by Aaron Paul Lazar at Monday, January 16, 2012

Those are some great suggestions! I especially like the idea of just sitting in a courtroom watching cases (no need to embarrass yourself and yes, it will be tedious at times but there is no better way to see what the ebb and flow is like!)
I went to law school and practiced some but law is so specialized that even though I got an "A" in criminal law I know that I really don't know a thing about it!

Chris, thanks for guest blogging with us here at Murderby4, we've enjoyed having you! And also thank you for the wonderful suggestions. Anyone writing a legal thriller should file this article away - super advice!