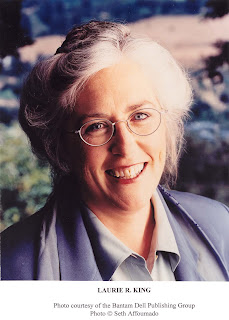 Please join me in extending a warm welcome to Laurie R. King, bestselling author of 21 crime novels, including a historical series featuring young Mary Russell and her somewhat more famous husband, Sherlock Holmes. Ms. King’s upcoming novel Pirate King is set in 1924 London, Lisbon, and Morocco, and promises to be a rollicking ride. I've already started reading an advanced copy of the book and am thrilled to be back in the world of Mary Russell and Sherlock Holmes. (see below where you can order a signed copy for yourself!)

Ms. King has graciously agreed to appear here today, offering advice from her Mutterings blog. Thank you, and welcome!

I’ve been lucky with reviews. I’m sure there are any number of loud and pointed complaints on my various books’ Amazon pages, but I take care not to be the obsessive author who reads and agonizes over every iota of negativity. Yes, I have had bad reviews—the Kirkus phrase, “a long, keen disappointment” will be found branded across my frontal lobe when I die—but more often, I have had reviews that make me want to ring up the reviewer and just, well, explain.

Which impulse, thank heavens, I have never been in a position to carry out, because that way lies both madness and the death of a career.

On the one hand, reviews need to be taken with grains—nay, spoonsful—of salt: the reviewer is a single person, who may (or very occasionally, may not) be well read, but who remains a single person, with individual tastes, a tendency to be irritated by continued disappointments (be they long and keen or brief and dull), and a niggling resentment that even the most thoughtful and laboriously crafted review pays a pittance. Journals and newspapers try to avoid assigning books to unsympathetic reviewers, since there are limits to the amusement of having a guy who adores hard-edged thrillers ripping apart chicklits and cozies, but still, we all have our taste in books, and sometimes a novel isn’t it.

I do read my reviews. I even ask my editor to send me the bad ones, because I can learn from them, and not just learning how to bleed and smile at the same time.

With every book, I try to balance story line and character, amusement value and serious issues (well, not too many of those in Pirate King…) I review the dialogue a dozen times, I hammer away at illogical plot turns, I fiddle endlessly with the balance between too much and too little setting, I try to make all the characters realistic enough to be believable, yet surprising enough to be interesting.

And it doesn’t always work. If I get one review that pans my attention to plot where six others have praised just that, I’ll figure it was probably a bad day for that reviewer. But if I get six criticisms of the same point, or—since reviewers in general are friendly and helpful people—six comments that damn by faint praise, I take that as a clear sign that I got it wrong. That I failed to differentiate the characters sufficiently, or to trim down the descriptions and integrate them into the flow of plot, or to make sure the plot devices didn’t creak as they turned and that the plot as a whole held water.

Of course, there is nothing to be done for that book—only rarely is a writer permitted a complete rewrite of a published story. (Which explains why I almost never re-read one of my books once it’s between hard covers.) However, a series of questionable reviews makes me very, very alert to the area being pointed out, the next time around.

Because every writer needs to write scared.

I said earlier that I’ve been lucky with reviews. That doesn’t mean I don’t write scared. Laurels are for polishing, and breathing in the smell of, not for resting upon. Praise is a thing to be accepted with grace while a voice of disbelief whispers in the other ear, “A part of this is luck. And luck can run out.”
I am grateful that people like my stories. Every day I am grateful. And I never forget to write scared.

However, if you think this means I’m not going to sing aloud the great Booklist review I just got, you’re very wrong. I figure, if you got it, sing it.  You can’t be scared all the time.

Brilliant and beautifully complex, the chronicles of Mary Russell Holmes are told in the voice of their subject, the much younger, highly educated, half-American Jewish wife of Sherlock Holmes. This one’s tangled web includes some very high comedy from Gilbert and Sullivan, pirates, and early moviemaking, Russell finds herself, possibly at the behest of Mycroft Holmes, working for Fflyte Films and on a Mediterranean voyage (in a brigantine!). Her assignment: shepherding a bevy of blonde actresses, their mothers, young British constables, and a handful of men whose dark eyes and darker scars may reflect an unsavory history. Mr. Fflyte, we learn, is making a film about the making a film version of The Pirates of Penzance and wants real pirates, a real ship, and real locales. King rings merry changes on identity, filmmaking, metafiction, and the tendency of each and all to underestimate blondes. Her descriptions of locale are voluptuous, and her continued delineation of the relationship of Russell and Holmes exquisitely portrays the eroticism of intellectual give-and-take. Quotations from Gilbert and Sullivan and the language of sailing ships (take that, Patrick O’Brian!) add to the general, luscious hilarity. 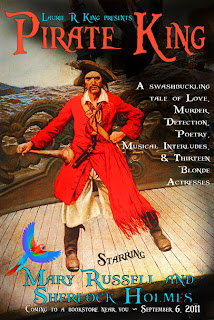 To order a signed copy of Pirate King, go to the Poisoned Pen shop.

Since Laurie R. King’s first book, A Grave Talent, came out in 1993, she has gained a reputation as a prize-winning, best-selling author who holds an undying place in the hearts of readers ranging from fourteen year-old girls to members of the House of Lords to ninety year-old retired Air Force colonels.
King was born in northern California, the third generation in her family native to the San Francisco area. She spent her childhood reading her way through libraries like a termite through balsa, and her middle years raising children, traveling the world, and studying theology, earning a BA degree in comparative religion and an MA in Old Testament Theology. She now lives a genteel life of crime, back again in northern California.

Ms. King's web site, with excerpts from Pirate King and loads of other entertainment, can be found here: www.LaurieRKing.com.
Posted by Aaron Paul Lazar at Friday, September 09, 2011

Than you for adding to our blog, Laurie. As a reviewer and a reviewee, I thoroughly enjoyed your take on the subject. I agree, the critique should always be instructive and constructive, never a forum to vent the reviewer's spleen on a genre of type of book he or she doesn't care for. Please don't be a stranger, your comments and insight will always be welcome!

I love your attitude of "writing scared" but not being scared all the time.

Welcome, Laurie! It's such a pleasure to have you here on MB4 today.

I totally related to your piece. Like Ron, I am both a reviewer and my series are often reviewed, and the fear of being "outed" as a horrible writer by some elite sophisticate seems to follow me around. A quiet little voice, but annoying, none the less.

When Tremolo was on the number one Kindle list for a few weeks this spring (the free list, LOL), I got a wide range of reviews. Most seemed to enjoy it, but there were some who never should have read it based on their tastes. A few panned it, and I had to forcibly stop myself from checking every day on Amazon to see who was saying what!!

Thanks for your insight and keep on writing those wonderful Mary Russell novels, I am honestly addicted. ;o)

So happy to have you here today, Laurie. Writing scared, eh? Maybe that is what I have been doing and didn't know it? It's true though, reviews will certainly lift you to heights or lower you to depths you can not reach any other way.
best of luck with Pirate King!

If writing scared is a good thing, I've got buckets of good saved up. Gawd, I'm constantly scared of everything while I'm writing! *G*

Great advice! And your series sounds fantastic (also, I adore pirates, so BONUS! :-)

A great post. Having been on both sides of the review pen, I know how challenging they can be.

We writers are such a fragile lot, aren’t we? One negative word and all the great reviews get shoved out the window as if they’d never been written. Still, as you indicated, there is always something to be learned from negative reviews especially if several reviewers make similar comments. On the other hand, one reviewer tore into one of my novels and yet it went on to win awards. Go figure.

Thanks so much for sharing your thoughts with us on Murder By 4.