You all probably know by now that we're taking a summer sojourn from our normal schedule here at MB4. But as I come across helpful or interesting pieces, I'm going to randomly post them here.

This week I stumbled upon a site that promises to be very helpful to new writers. I know our audience is broad - we are blessed with newbies and seasoned professionals - but it's always nice to have a place to refer to for the basics, such as manuscript formatting.

Glen Strathy, from How to Write a Novel Now, has graciously agreed to share this info with us today. Please join me in welcoming him to Murderby4. 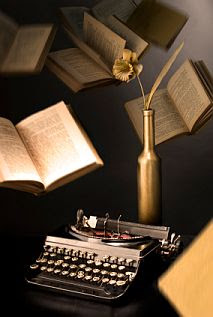 The manuscript format used in publishing has evolved over time as technology has changed, but if you grew up with word processors, it may seem rather quaint, old-fashioned, and downright boring to look at. Word processors come with many desktop publishing capabilities that you may be tempted to use. And if you were working in any other business, you would probably use them to give your document a distinctive and attractive look.However, if you are submitting your book to agents and/or publishers, it is best to forget about all that and follow the correct manuscript format for publishing that was developed back in the days before word processors existed and professional writers used typewriters.
There are several reasons why this format became standard.

Think about this. Editors and agents spend all day and often the evening reading. By the time they are good at their jobs, they have a lot of experience with eyestrain and are prejudiced against any document that is hard to read. Manuscript format is designed to be easy to read, with plenty of white space and no distractions.

Despite the fact that everyone uses computers, many editors still like to look at a hard copy and make editing marks in pencil between lines and in margins. They need room to do this.

I know, word processors today can count the words in a manuscript with one simple click. But publishers have their own system. They're not interested so much in the actual number of words you've written but how much paper they need to print them on. When you follow the standard manuscript format, you will have an average of 10 words per line (assuming an average of five letters and one space per word). You will also have an average of 25 lines per page. Therefore, publishers can assume there are 250 words per page. Simple, eh? If you use the correct font, one in which each letter takes up the same amount of space, it becomes very easy for the publisher to know how many pages the final book will need.If you use a non-standard manuscript format with different spacing and margins, you will create an extra headache for the editor you're trying to impress.


4. Editors are used to manuscript format.

When your manuscript is formatted the standard way, your editor can put his/her full attention on your words without being distracted by any non-standard typography. At times in the 20th century, literary writers experimented with the art of typography – creating books that could not be read aloud but had to be looked or felt, where the text was as much visual art as language. One reason it didn't catch on with the general public is because it made more work for the reader. Readers expect a certain look to a book and anything non-standard (like ALL CAPS or too many exclamation marks) looks amateurish!!!


(For example, you may notice that on this website I tend to use Canadian spelling, because it's what I grew up with. If I was being paid to write this article, I might adopt a different convention. However, if you are American or British you may find Canadian spelling irritating, and for that I apologize.)
So here, briefly, are the rules for using correct manuscript format for a novel:
* White paper. No coloured paper or electronic files with coloured backgrounds.
* Single-sided. (Obviously this applies to hard copies.) Editors don't expect to look at the back of a page.
* Standard font: Courier, 12 point, is the standard font to use in manuscript format. This size is easy to read and makes all the letters take up the same amount of space on a line, so word counts are easy. Don't change fonts or sizes anywhere.
* Double space your manuscript, but don't put any extra space between paragraphs. Again, it's easy to read and leaves room for editing marks.
* Only one space between words or sentences. (Traditionally, typists put an extra space after periods and colons, but this has been abandoned by publishers as a waste of space and paper.)
* 1-inch margins top, bottom, left, and right. This should give you 60 characters per line on average (10 words) and 25 lines per page.
* Ragged, not justified alignment. Word processors can do justified alignment, whereby all the lines end flush with the right-hand margin, but don't do it. It changes the spacing between words in a way that is distracting.
* Include a header on every page except the title page. The header should put the page number in the upper right hand corner. This makes it easy to tell, when flipping through the manuscript, if a page has gone missing. Left of the page number, put your name and the title of your book, or a shortened version of each (for example “Dickens/Two Cities 25”). If a page gets separated from your manuscript and mixed up with other papers, this information will help someone put it back in place.
* Title page. The title page will have the book's title centred, half-way down the page. Underneath that, also centred, put “By” followed by the author's name. In either the top left or bottom right corner, provide your contact details: name, address, phone number, email address. On the opposite side of the page, put your estimated word count.
* No bold, italics, or any other font effects. You can underline foreign words, titles, and things you want to emphasize, just as you would if you were using a typewriter (publishers will convert underlining to italics). Black is the only acceptable font colour.
* Don't add hypens to break up words at the end of a line. Most people wouldn't think to do this unless they had trained as a typist. But just in case you did, don't. The line divisions will change in the printed book, which means someone will have to go through the manuscript and remove many of the hyphens you add. So just leave them out.
* Start the first chapter 6 double-spaced lines down from the top of the next page. Centre the chapter title or use “Chapter 1” if you don't want chapter titles. Then hit return twice to leave extra space before the story starts. Start every chapter on a new page, with a similar title.
* Put “End” at the bottom of the last page, so the editor knows for certain it's the last page.
* Do not bind or staple your pages together, or include a cover. Editors want the pages to lie flat. They don't want to hold the manuscript open. Just stack the pages in order and pack them into a box.
Of course, in addition to following the correct manuscript format you will need to check all your spelling, grammar, and punctuation before you submit your novel. Mistakes in these areas damage your credibility with an editor, as well as showing that your manuscript still needs much work.

Glen C. Strathy has earned his a living as a freelance writer since 1999, writing non-fiction, direct response promotional copy, and fiction. Working with Stephen Leeb, he co-wrote The Coming Economic Collapse (Warner Business Books, 2006), which became both a New York Times Business Bestseller and a Business Week Bestseller and contributed to Game Over (Business Plus, 2009).His novel for 9-12 year-olds is currently in production under the working title of Dancing on the Inside. You can find out more about it at... Glen Strathy's other website

Glen holds a B.A. in English and Drama and an M.A. in English from the University of Western Ontario. He received a B.Ed. from Queen's University, Kingston after completing the Artist in Community Education program, and studied acting and directing at Ryerson Theatre School. He is a member of the Professional Writers Association of Canada (PWAC).
Glen lives with his wife, fellow writer Kaitlin Rainey, and their daughter in Kingston, Ontario, Canada.
Posted by Aaron Paul Lazar at Wednesday, June 22, 2011

Very practical advice for the first timers, and a very good reminder for us old pros. As a new writer I was always struggling to find a format the editors and publishers would take seriously, and I am always amazed by the number of manuscripts I have seen that fall outside this most basic set of guidelines. Let the story tell itself, and let the readers do their jobs! Excellent post!

Good stuff, Glen. These guidelines should fit most requirements. Then there are those cases where and editor or publisher has the author jump through their formatting hoops. Sometimes I think it's just to see if the author can follow THEIR guidelines to the tee--if not, shuffle the manuscript off to the slush pile, or reject.

Times Roman 12 point does seem to be a quite common font with a number of editors.

As Ricky said, I've also seen multiple variations on submission requirements, and of course it behooves all authors to follow the requirements to the letter.

Thanks, Glen, for being our guest today on MB4!

Thanks for the kind comments. Makes me think I might write something on non-fiction formats next - a much trickier subject.