And then there was... a circular story. 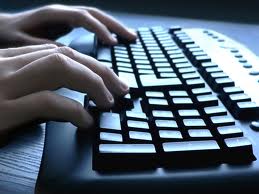 My writing process has taken bizarre twists and turns over the years. Having chatted with many of you over the years, I know we've all experienced this in our own fashion.

We ask for and accept counsel that changes our lives, perhaps even our writing styles. It's this coveted advice that we hope advances us to the next level, toward the elusive goal of mastering the art of writing mysteries.

Sometimes our advisers' opposing viewpoints and various bits of advice can push us in literal and literary circles. Here's my circular story. ;o)

In the early days of my writing, my mentor, Mr. Ray Edinger, author of Fury Beach, advised me that using gerunds, or "ing" verbs, was not exactly the best approach to the craft, and that I should attempt to use more past tense ("ed") verbs instead. Ray is a wonderful guy, and I was most grateful for all his advice during those early years. Here's his book - a fascinating look into history in the Arctic. 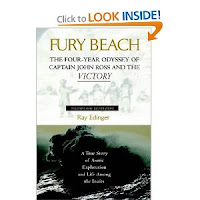 I can't remember specific examples, but I probably wrote things like this:
He was walking toward the woods when he heard the crash.
Now, there's nothing sinfully wrong with that sentence. But if every sentence starts out with a "to be" verb (was) and an "ing" verb, it might get tedious. Some people call the frequent "was" constructions "a bad case of the wuzzies." But that's another story for another day. My current mentor, Sonya Bateman, cured me of that one long ago. Ha.
Anyway, heeding Ray's advice, I listened like a good Doobie and purged every "ing" verb from all the as yet unpublished books I'd already written.
Shortly thereafter, after taking a break from the whole thing, I reread the manuscripts and found using all "ed" verbs to be somewhat stilted and boring, so I went back and repopulated a few "ing" verbs among the others. The prose sounded much more natural.
Next, I received a comment in one of my writing forums (anyone remember the Crabby Cows? LOVED them!) that floored me. A fellow writer said that using "as,"(for example, he did this AS something else happened) was a sure sign of an amateur, and that if an editor came across a book with such "as" constructions in it, he or she would toss it immediately to the slush pile!
Petrified I'd be cast in this terrible light, I steered away from having my characters doing something "as" another thing was happening, and replaced it with actions separated by commas, a few well-placed "ands," and quite a few "thens," to show the series of actions. Of course, since then, I've noticed plenty of "as" constructions in best selling authors. Nobody seems to object.
Next, I got advice from a writing forum that using "then" was as bad as "as." The coveted advice was pronounced:  use "and" instead of "as" to link two actions, instead of having multiple terse statements or tons of comma separated actions.
I didn't think that sounded right in all the applications, especially when my characters couldn't be doing all this stuff simultaneously, so I eventually asked a few writers (big successful ones) who said "then" was just fine, and that they used it all the time.
Is your head spinning yet? Mine sure was.
So I ended up using lots of sentences like this:
Sam dried his hands with a paper towel, then skirted round the table to pour two glasses of juice from the pitcher.
Now, to complicate matters, recently two of my new Beta readers read through a few of my manuscripts and noticed I used an awful lot of "he did this, then he did that..." constructions. It bothered my friend Sonia Martinez so much that she started highlighting all of them.
I almost threw my hands in the air, having agonized over the alternatives for almost ten years.
I know, I know. That sounds ridiculous. But believe me, it tortured me and I thought I'd finally found a suitable solution a few years back.
THEN (LOL), Nancy Robinson, my newest Beta reader and a great friend from my old days at Kodak, suggested I replace some of the the "then" constructions with a verb ending in "ing."
Here's an example of what the above sentence might look like now:
Sam dried his hands with a paper towel, skirting round the table to pour two glasses of juice from the pitcher.
Here's another example:
Roberta disappeared, then returned with a sparkling amber crystal.
Her simple solution:
Roberta disappeared, returning with a sparkling amber crystal.
It sounds pretty natural, doesn't it? Uh huh. And here we are, full circle, back to "ing" verbs!
I know, it's not exactly the same, but it's kind of amusing, regardless.

And who knows, maybe it was the way I used to write it before I started to worry about all the advice I was getting early on. Not that I didn't appreciate it, more than I can ever say. And not that I didn't need TONS of advice back then, of course.
I have to tell you, I love Nancy's suggestion. I know it probably sounds mundane and ridiculously obvious, but see, I had trained myself out of using "ing" words so much that my brain subconsciously avoided it. So now - I think - I'm temporarily satisfied.
For now, anyway.
Funny thing is, no matter what stage my writing has been in, from Double Forte' to Healey's Cave, my readers don't seem to notice or care what construction I use. I don't think they notice at all. They just want a good story. And maybe that's all that matters. (but try to convince my brain of that... it's not easy for this OCD writer...)
Thanks for listening to me rant today, and if you love to write, remember to write like the wind!

The unfortunate truth (and we’ve all done it as newbie writers) is that we often place too much value on the advice of every person (experienced or not) who reads our drafts. The best thing to do is to find a reference book you trust and make it your bible (mine is “Self-Editing for Fiction Writers” by Renni Browne and Dave King).

I don't agree that removing the word “as” from a bite is always correct. At times it’s the only way to describe the action. However, I make a conscious effort to never begin a sentence with it. In chapter 11 titled “Sophistication” (page 193) Borwne & King wrote:
“…avoid two stylistic constructions that are common to hack writers, namely: ‘Pulling of her gloves, she turned to face him’ and ‘As she pulled of her gloves, she turned to face him.’ Both the “as” and “ing” constructions are grammatically correct and express the action clearly. But … weaken your writing. Another reason to avoid the “as” and “ing” construction is that they give rise to physical impossibilities.”

The thing is, sometimes we think we need to write every movement the character makes, but it’s not always necessary because in truth, the reader is smart enough to follow the action without a step-by-step map to guide them. And yes, when I read my early works I cringe! When we describe every detail of every bit of action, it may give the reader a clear picture of the action but we limit their imagination as a result.

One way I get around the "ing" vs. "ed" dilemma thing is to break it up into two short sentences.

This works for me because of my crime genre.

PS: Even Browne & King agree that they don't suggest that a writer avoid the "as" and "ing" phrases all together. At times they're necessary. ;)

Marta, great comments. Sounds like I should pick up a copy of that writing book. My favorite to date has been Stephen King's "On Writing" - I adore it. Thanks for you time and have a nice Sunday!

P.S. I do a lot of short sentences, too, but I can't have the whole paragraph in short bursts, so need to break it up, of course. But I like how short terse sentences freshens up the prose. ;o)

hehe this post brings back memories of my own whereby many critters gave me the shivers. Ended up just saying to heck with all the advice. Write like the wind! Let the rough ends drag, at least until you type the END!! Then go back with a good self-editing book, recently published!! and edit the best you can.

All an agent or editor asks is for us to write the best book we can. They can teach us how to edit, but not how to write that dream story.

Hi, Kim. Great advice! Thanks and have a wonderful week - can't wait for your next book. ;o)