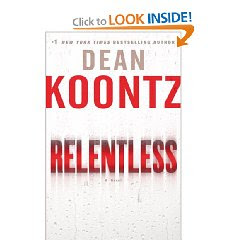 Excellent review, Aaron. And so right on. Mr. Koontz is a master. I never did get through the last one; I was too freaked. But I'm picking it up today and finishing it off. Thank you!

Hi, Joylene! Happy Sunday! Thanks for your comments and hope you can enjoy the rest of the book!

Wonderful quotes that make me want to get the book and read it!
Thanks for the heads up on this one.

Aha! That's why I haven't picked this one up yet. The main character is a writer. It is SO easy to make a bad story that way (and I have made a personal vow to never, ever write a novel with a writer as the main character...)

But with your recommendation, Aaron, I will read this one. I do adore Koontz! *G*

Aaron. You shouldn't write such intriguing reviews. My pile of unread's is already higher than my bedposts. I'll have to add this one to that heap now. I'll get it from the library. That way I can't procrastinate

Thanks, Marta! Hope you enjoy it as much as I did.

And Sonya - I usually agree about books from writers' POVs - it usually seems so unimaginative. But this one's a huge exception!!

Beryl! I'm sorry! I know - we've had to get a separate set of shelves for the forty or so books in our "to be read" pile. Dale and I read a lot - but the pile seems to never get lower!!! Thanks for stopping by. ;o)