I’ve been thinking about pseudonyms lately for a lot of reasons but the main one is this: If you clicked on this link hoping to find a treatise on the wonderful (and bestselling) Anna Pigeon mystery series, you will be disappointed. For the record, I am not related to Nevada Barr, I do not know Nevada Barr, and Nevada Barr is definitely not my pen name (although it certainly is more exotic-sounding than Nancy). Now that we have that straight, let’s talk about me. Just kidding, sort of.

I write the Page One mystery series which is set in Michigan’s remote and rugged Upper Peninsula (affectionately known as “da U.P.,” whose native residents are known as Yoopers). Nevada Barr’s series is set at various national parks across the United States including two books set in Isle Royale National Park, which is officially part of the U.P. but even more remote and rugged. My protagonist is a scrawny newspaper reporter with a basset hound sidekick, a police detective for a best friend and a soft spot for society’s forgotten souls. Nevada’s books feature the aforementioned Anna Pigeon, a tough-minded, battle-scarred park ranger, perfectly capable of single-handedly taken’ down the bad guys (or gals).

You might think there wouldn’t be all that much confusion among readers about who writes what but au contraire. I’ve lost track of the number of times fans have told me about trying to explain my books to their friends and being corrected with “Oh, you must mean Nevada Barr. Yes, I love her books.” Sigh.

Thinking there would be a positive side to our similar names, when my first novel was released, several friends pointed out that my books would be sitting on store shelves right next to those of the bestselling Nevada, thereby silently beckoning her fans to let their fingers travel a bit to the left and take a chance on a newbie. Funny thing is, my novels almost never end up in the mystery section, rather they are placed in the regional section, lumped together with books featuring photos of everything “Yooperesque” from loons to lighthouses; books about how to bag a pheasant, wild turkey, buck, or bear; recipe books featuring local delicacies like pasties (as past-y, not paste-y), venison stew, etc.; or history books telling the story of the copper boom, iron range, or lumber industry – interesting reading, but not exactly New York Times bestsellers. If you want read one of my books, you’re gonna have to look for ‘em. But that’s a separate problem.

My advice to those pre-published mystery authors with names like Sarah Grafton, Abigail Christie, or Janelle Evanovich, is to use a pseudonym (don’t get placed in the regional section in the local bookstore, if you still have one). I’ve developed several daring variations depending on which genre I write in next: Morghanna Zarr for fantasy tales; Blanche Moreau (family name) for historical romances; Hermione Barron for British country house locked-room mysteries; and Jaz Barrone for good ol’ American shoot-‘em-up thrillers. At this point, anything has to be better than plain white bread Nancy Barr, right? 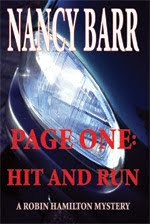 Nancy Barr is the author of three novels, Page One: Hit and Run, Page One: Vanished, and her latest, Page One: Whiteout. In addition to dreaming up aliases, she is working on developing several ideas into at least one coherent, entertaining book. Check out her website : Nancy Barr at Mystery Writers.
Posted by Kim Smith at Friday, March 19, 2010

LOL I pity anyone named Janelle Evanovitch who might be writing a book and trying to get published. :-)

I love your sense of humor, Nancy. And I would totally read a book by Morghanna Zarr or Blanche Moreau (or Nancy Barr!)

LOL! I feel so much better for having the same name as a famous swimsuit model!

Nancy, I love your new potential pen names! What a riot. It's funny, but when I started writing my mystery series, I had originally intended to write under the name of Jack Beauregarde. Everyone loves a "Jack," right? Jack's always the hero in the big movies (more than I can count) and of course, there's always good ole' JFK. But a close friend urged me to put myself out there and use my real name. I guess I'm glad I did, but it's not quite as glamorous! LOL. Thanks for posting with us today!

My twin (in name only) is a jeweler who evidently does quite well somewhere on this contenent. I get excited when my website jumps ahead of hers on the search engines.

Thanks so much for sharing with us, Nancy!