Why I Choose to Write About Fictional Settings by F.M. Meredith 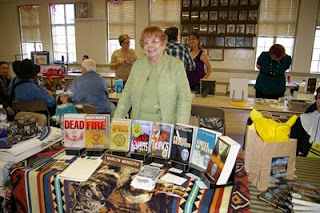 Many authors set their mysteries in real places, but because I’m writing about small towns I’ve chosen to have my characters live their lives in fictional settings. I grew up in Los Angeles, but after I married I lived in a series of small towns. Each one had its own culture and personality. I live in a small town now, one set in the foothills of the Southern Sierra. I’ve used this background in several of my books—and not always with the same name or surroundings.

What I’ve learned while living in a small town is that businesses don’t stay open. In the time that it takes to write and get a book published, if I used a real restaurant or gift shop in one of my books it might be closed by the time the book came out. Also, if the town is fictional, I can change locations of homes and businesses to suit the plot of the story.

With my Rocky Bluff P.D. crime series, I decided to locate the town on the California coast between Santa Barbara and Ventura. There is one real small beach town in the general area, Carpenteria, which is in Santa Barbara County but I wanted Rocky Bluff to be in Ventura County because I’m more familiar with that one. I also didn’t want people to think that Rocky Bluff was a substitute name for Carpenteria.

Rocky Bluff and its police department are completely fictional. Years ago, I lived in Oxnard when it was still a small town. I knew many of the police officers on the Oxnard P.D., partied with them and their families, and was good friends with their wives. It was a different police department than it is now and faces much different challenges. When I decided to write about a police department, I wanted it to be more like the smaller one of that earlier time period.

The Rocky Bluff P.D. is small and doesn’t have all the modern investigative tools that a larger department in a big city has. Though they do use the Ventura County Coroner, most of their cases are solved the old fashioned way, a lot of footwork, hands-on investigation, and questioning of witnesses. And as I tell my friends who are police officers who read my books, “It’s my police department and I can do it anyway I want.”

In the latest in the Rocky Buff P.D., AN AXE TO GRIND, 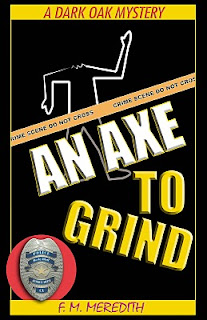 the setting plays an important part in the story. The book begins with the discovery of a corpse without a head. Detective Doug Milligan and his partner’s investigation takes them to an appliance store, a home on the hillside that was once a part of a Spanish hacienda, an apartment house, a new trendy restaurant, and an abandoned and dilapidated warehouse. With his fiancée, Stacey, he attempts a romantic walk on the top of the bluff overlooking the ocean, but it is rudely interrupted. Alone, Doug goes on the University of California Santa Barbara campus looking for a suspect with dire results.

When my characters do go to a real place like the UCSB campus, I do the necessary research. I’ve been to UCSB and I did interview a campus police officer to get the details correct for what happens on the campus.

Of course, like I would have to do if I were writing about a real place, I have to keep track of what I’ve written about Rocky Bluff, the geography, the location of businesses, the names of streets and which way they run.

Marilyn Meredith is the author of over twenty-five published novels, including the award winning Deputy Tempe Crabtree mystery series, the latest Dispel the Mist from Mundania Press. Under the name of F. M. Meredith she writes the Rocky Bluff P.D. crime series. No Sanctuary is the newest from Oak Tree Press.

She is a member of EPIC, four chapters of Sisters in Crime, Mystery Writers of America, WOK, and on the board of the Public Safety Writers of America. She was an instructor for Writer’s Digest School for ten years, served as an instructor at the Maui Writer’s Retreat and many other writer’s conferences. She makes her home in Springville CA, much like Bear Creek where Deputy Tempe Crabtree lives. Visit her at http://www.fictionforyou.com and at her blog - http://www.marilynmeredith.blogspot.com/.
Posted by Kim Smith at Monday, March 15, 2010

Thanks for hosting Marilyn today. I've truly come to love the characters in both of her series.

When Marilyn drafted this guest post, I thought immediately of my own WIP, and how I also choose a fictional setting. I certainly liked the freedom it allows.

Thanks again for having Marilyn here today.

Pump Up Your Book

Fictional settings definitely have their advantages! Some might think it's "easier" to make up a town, but I don't believe that's true. There's a lot to keep track of when you create a setting - and if you're writing a series, you have to remember it all.

Hey, it works for Stephen King! And there's probably a bunch of people who believe Castle Rock, Maine, is a real place. :-)

Thanks for hosting me today. I love this blog and visit it often, so happy to be back.

I'm new to this blogsite, enjoying it immensely. Not new to Marilyn's works. Creating a fictional town is not as important as recreating the feel of the places we've been to or live in. No matter what we call our locations, giving a sense of place and what we treasure about the area will always pull readers in. Marilyn does it with expertise!

Love having you here again, Marilyn! thanks for the great post!

Thanks to you all for reading this blog and making comments. I truly appreciate it. Hi, Sunny.

Nice blog. Thanks. Some of my friends keep telling me to write about real places but I'd feel like I was forever second-guessing myself - was this there then, does that road really go there... Nice to read that a real writer might feel the same way.

I've enjoyed making up the city in which my Sam Harper character lives. My current novel is set in Los Angeles and I'm constantly having to check my facts.

Good to have you here, Marilyn!

Thank you all, I feel privileged to have been able to visit your blog.

Great post, Marilyn! Thanks for coming back to MB4 to guest host!

Marilyn, great to see you hard at work. The books sound great. I'm still thankful you put me on the right track on writing what I know, Erotica. Thanks for the encouragement. Your fellow Sisters in Crime friend, Toni Weymouth.

Rocky Bluff may be a fictional place, but after you read Marilyn's books in the Rocky Bluff PD series, it feels like a real place. Maybe better because they have such interesting crimes there.

Like you, Marilyn, I use a mix of fictional and real places for some of my books. I like the freedom that allows, although the next book of mine to come out is set in Dallas. Since the central characters are Dallas homicide detectives I couldn't fictionalize the main setting. I had to do a lot of research and discovered that between the time I first researched settings and now, one restaurant did close. Got to watch those details.