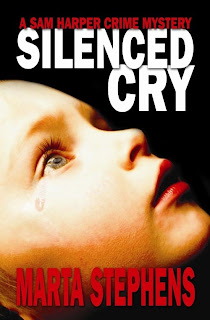 Normally, Tuesdays are S. W. Vaughn's days to post, but our good friend is off on a much deserved vacation for a few days. In an effort to keep the blog going, I decided to take Aaron up on his suggestion of a couple of weeks ago about posting the excerpt from my debut novel, SILENCED CRY. Although it's a bit longer than our standard posted, here is the first chapter. Look forward to your comments.

The hour-long sessions started at nine in the morning, twice a week, whether narcotics detective, Sam Harper liked it or not. The only good thing about this damp and cold Massachusetts morning was that it marked the midpoint of Harper’s commitment. Internal Affairs had drilled him for three days in a row. Now the police shrink wanted a piece of him. He was sick of her dogged questions. That was his job, to wear the other guy down. Three sessions left, three hours of digging into his past, into the events of that night – that goddamned night.
Neither the mild vanilla scent floating up from a flickering candle on the doctor’s desk nor the subtle gurgle bubbling from a tabletop fountain were doing their job to relax him. Harper rubbed the arms of the leather chair with his thumb as he calculated his next move. He stared at her and finally broke the silence.

“You ever kill a man, Doc?” A subtle twitch of her brow told him he had her attention. “A split second. That’s all it takes, pull the trigger, and whoosh! He’s gone.”

Dr Brannon lowered her gaze and resumed her scribbling. The navy overstuffed chair seemed to swallow her small frame.

“Mellow was our only link in the case. At least that’s what Gillies thought. He told me every damned thing hinged on getting to Mellow before homicide got their hands on him.”

“And you had reservations?”

Harper looked away as the Chandler Police Department psychiatrist took notes of his crumbling life.

“Does it matter?” His glance swept up to the dark paneled wall behind her desk. Framed certificates hung in an orderly row like crows on a wire. They mapped out her qualification and gave credence to her ego. He didn’t need her to question his motives or to dig into his past and drag the memories of that night to the surface. They were there, frozen in Harper’s mind – the second he got off his round. He’d never forget the blast or the hammering rain beating against his face. The look of Frank Gillies’s lifeless eyes had scorched itself into his memory. Harper leaned forward and dropped his head. Fists jammed against his eyes as if to rub out the intruding images. He had spun the moment any number of ways, but the outcome never changed.


Brannon crossed her legs. She folded her hands and tapped her fingertips. She watched in silence, waiting to analyze his next thoughts.

“You do realize you don’t go back to work without these sessions.” She picked up the notepad again. The sound of her pen striking twice against its surface made dull impatient clicks. “Look, Detective. No one said this was going to be easy, but you have to open up. You are the only one who can do it.”

Harper didn’t buy her attempt to bring him back into the conversation. He didn’t know if he could, as she said, open up. He pursed his lips and glanced out the window.

"Damned wind’s picking up again, Doc.” He buried his mouth in the L of his thumb and index finger touching the outer corner of his eye. He rose and turned his back to hide the familiar burning that blurred his vision. Apprehension had become his unwelcome companion, a reminder of the failings he refused to accept. Anger crept in. It bubbled and seared holes into his sense of reason.

“Should’ve been me.” He closed his eyes, pinched the bridge of his nose, and cleared his throat. “I was right in Mellow’s line of fire. The damned piece was inches from me.” The thrust of his fist made a hollow sound against his chest. “You don’t get it, do you?”

“What’s the point? You know what happened. We’ve been over it a million times. Don’t you get tired of listening to this crap?”

“We can talk all you want. Won’t change a damned thing. Won’t bring him back.” He dropped back into his chair and swept a hand across the stubble he hadn’t shaved in three days. “What’re you going to do? Tell me to think happy thoughts? Will that do it? Is that going to stop the dreams?”

“Tell me about them.”

“Not today.” He wrestled between his grief and growing suspicions of Gillies. What really went down five days ago in front of the Roving Dog Saloon? He jabbed a white knuckled fist onto the arm of the chair and looked away. Every sordid detail came rushing back without prodding. “It was past eleven that night when Gillies got the tip that Mellow had violated parole.”

Read the collection of SILENCED CRY reviews at http://www.martastephens-author.com/critical_reviews.html

Sigh. Ah. I love Sam. Can I marry him in my next life?