The Birth of Gentleman Aegis, and Sherlock Holmes and the Mummy’s Curse By Stephanie Osborn 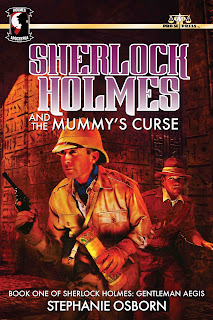 I’ve got this series. It’s called the Displaced Detective series, published by Twilight Times Books. It’s been described as, “Sherlock Holmes meets the X-Files.” In it, I yank Sherlock Holmes from an alternate reality’s Victorian era into the modern day, and he can’t go home again. He takes some time to get his footing, and then...the game’s afoot. The series has been called “literary crack,” and even Jerry Pournelle said this “is the real Homes, at the height of his powers, in 21st Century America, much as I would imagine he would be...”
Enter this dude named Tommy Hancock. Tommy happens to be the co-publisher and editor in chief of Pro Se Press, one of the movers and shakers in the New Pulp movement. Turns out he’s a fan of the Displaced Detective. So he approached me at a science fiction convention, and asked me to write Holmes for him – only he wanted a more traditional, Holmes and Watson in Victorian Britain, kind of story. So we sat down and talked. We decided what we’d do would be to create a prequel series to the Displaced Detective, so that alternate-reality version of Holmes would have chronicles of his past, with “his” Watson in his original continuum. And the Gentleman Aegis series was born.
Book 1 of that series was just released: Sherlock Holmes and the Mummy’s Curse. So what is it about?
Holmes and Watson. Two names forever linked by mystery and danger from the beginning.
Within the first year of their friendship and while both are young men, Holmes and Watson are still finding their way in the world, with all the troubles that such young men usually have: Financial straits, troubles of the female persuasion, hazings, misunderstandings between friends, and more. Watson’s Afghan wounds are still tender, his health not yet fully recovered, and there can be no consideration of his beginning a new practice as yet. Holmes, in his turn, is still struggling to found the new profession of consulting detective. Not yet truly established in London, let alone with the reputations they will one day possess, they are between cases and at loose ends when Holmes' old professor of archaeology contacts him.
Professor Willingham Whitesell makes an appeal to Holmes’ unusual skill set and a request. Holmes is to bring Watson to serve as the dig team’s physician and come to Egypt at once to translate hieroglyphics for his prestigious archaeological dig. There in the wilds of the Egyptian desert, plagued by heat, dust, drought and cobras, the team hopes to find the very first Pharaoh. Instead, they find something very different...
~~~
Stephanie Osborn, the Interstellar Woman of Mystery, is a 20+-year space program veteran, with degrees in astronomy, physics, chemistry and mathematics, "fluent" in others, including geology and anatomy. She has authored, co-authored, or contributed to some two dozen books, including celebrated Burnout and the Displaced Detective and Gentleman Aegis series.
~~~
Purchase links for Mummy’s Curse:
Amazon print
Amazon Kindle
Smashwords electronic (epub/mobi/pdf)
Pro Se Press:
~~~
Displaced Detective book 1:
Displaced Detective book 5:

Stephanie, I can not wait to read this book! I love your Sherlock (and his lady love) and will treasure each chapter. Thanks for sharing this with us today!

Thank you VERY much, Aaron! I appreciate that! I work hard, do lots of research, to try to get everything just right, so it's good to know people like it!

And I think you'll get a kick out of this book -- I think of it as a bit of a romp! I had immense fun writing it. It's suitable for YA, by the by, and is rather more of a traditional story than the Displaced Detective books, which I deliberately intended to go off in a slightly different direction with Holmes.

It sounds like a blast, Stephanie! Going to get my copy now!