This holiday season we are featuring guest blogs from a number of authors. We want to offer you cool books to check out for yourself or gifts, and also give these great authors a chance to crow a little about their works! 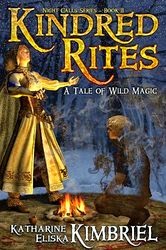 "...we are all Death’s pupils, we practitioners—students of the great healer."

When magic broke free in my blood, I chose to follow our ancient family path and become a practitioner. I'm learning to heal, and to protect innocents. I dip into minds, stalk vampires, and set wards by the light of the moon. I can hear the children of the night calling.

But there are other families...and other paths. Families with twisted ambitions and frightening powers. On the frontier, folk whisper that one clan is the most dangerous of all.

Chief among those dark sorcerers is a man known as the Keeper of Souls.

And now he wants to keep mine.

I blinked, surprised by the question. “Tonight?”

Marta lifted her head to meet my gaze; a half smile flitted across her lips. “No time like the present,” she offered, tugging her thread back through. “Between fetches and poltergeists, I think it is time for you to learn the first of the major arcana.”

Suddenly I was wide awake, and there was an ache in my chest, like I couldn’t catch my breath. Between fetches and poltergeists, I’d been feeling a bit ragged, truth to tell. I wasn’t sure I was ready just then for any more surprises.

“Christmas Eve?” I clarified. Marta had conducted a ritual on the solstice a few days past, but as a neophyte, I had not actively participated. Christmas was also a good time for ceremonies?

Marta looked amused. “’Tis said that ghosts walk on Christmas Eve. Can you think of a more appropriate—or safer—time to look beyond the borders of our world?”

“Ghosts?” Well, now...spirits were interesting. I straightened up.

“Actually,” Marta began, pinning her needle in place and setting aside her square, “the first major arcana you must learn is how to call upon Death.” Turning to smile at me, she added, “Nothing else is truly frightening after you have faced Death.”

I just stared at her, a sinking feeling in the hollow of my stomach. “Death isn’t really a person, is it? I thought that was just poetry, in the Bible....”

“Death is a spirit,” Marta said softly, her hands folding in her lap. “Some claim it is Azrael, the angel of death. Most people never see Death—or never know it is Death they see at the last. Death can wear many faces—Death can be anyone you have ever loved or known who has gone beyond. The face chosen is usually whomever the failing person wants most to see. And so the dying are comforted as they step over into the next life.”

The angel of death. Lord and Lady, these were deep waters, now. “Do we find those people over there?” I finally whispered.

“We may. Death is ambiguous when answering questions about the other side of life.” Marta looked a little evasive herself.

Marta nodded as she stood up. “That is why a practitioner calls upon Death, to ask questions. But it is not done lightly. You do not ask Death anything that can be answered by anyone or anything else. You have to work at the answers—Death does not make things simple.”

As she started for the kitchen, Marta added, “And you never, ever ask about your own death. That is the one question Death will not answer.”

Rising to my feet, I threw the big pillow over on the pile and started after her. “What are you going to ask Death?”

“This is the only time that you call upon Death when you have no questions. When you begin learning the major arcana, you must introduce yourself to Death.” Looking back at me as she lit a single taper from the kitchen fire, Marta went on: “All apprentices learn this spell first. Once you have cast it, Death will know your call, and may choose to answer it.”

I thought about it, and shivered. “May choose?”

Marta smiled and went into the stillroom. “When Death is invited, Death may choose whether to come.” Her voice grew lower as she continued. “The only way to guarantee Death’s arrival is to kill something. Soldiers do it all the time, and rarely see Death passing by. But if a practitioner kills to demand Death’s presence, it changes the relationship.”

“Changes?” I hesitated at the doorway of the stillroom. Relationship?

Marta returned to the kitchen holding the candle and her carpetbag of wands, wards and beeswax candles. “Death is a friend to a practitioner, Allie,” she said solemnly. “Death is the last, great healer, who takes away the pain we cannot ease. It’s not Death people really fear—it is suffering. Death will answer specific questions concerning healing.” She stopped before me, her expression grave. “Once you shed innocent blood to summon Death, you are no longer perceived as a healer. You become...something else. You become an enigma to watch, and perhaps a danger, a black sorcerer.”

“Death no longer trusts you?” I asked slowly, watching her eyes.

Her brows lifted slightly, and she said, “Perhaps. I try not to attach emotions or attributes to Death. Death is not human, and helps us for obscure motives. Death never volunteers information—but Death always answers.” Setting down the bag on the table, she began to take out things. “Sometimes the answer is no,” she added.

“Is Death male or female?” I asked quickly, more to hear someone speak than to know the answer...which was a good thing, because Marta was done answering questions.

“Both, and neither. Get your coat.” As I looked at her in surprise, she said, “We do not need ritual robes for this ceremony. Just fire and water, tobacco, blood, and honesty.”

I was halfway into my coat before I realized Marta had said blood.

Might as well have not bothered with the coat. No mere sheepskin was going to warm my body, much less my soul.

Not this Christmas Eve. 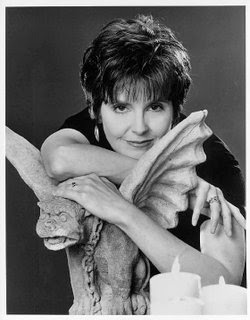 Katharine Eliska Kimbriel reinvents herself every decade or so.  The one constant she has reached for in life is telling stories.  “I’m interested in how people respond to choice.  What is the metaphor for power, for choice? In SF it tends to be technology (good, bad and balanced) while in Fantasy the metaphor is magic – who has it, who wants or does not want it, what is done with it, and who/what the person or culture is after the dust has settled. A second metaphor, both grace note and foundation, is the need for and art of healing.  Forthcoming stories will talk about new things that I’ve learned, and still hope to learn … with grace notes about betrayal, forgiveness, healing and second chances.”  A Campbell Award nominee.

Thank you, Aaron, for sharing a snippet of Kindred Rites with your readers. 'Tis the season for ghosts, of course!