BEGINNING TO WRITE LATER IN LIFE By Ken Malovos

Today as a part of a Pump Up Your Book! virtual book tour, we are featuring an article by attorney Ken Malovos, which proves that it's never too late to start writing! Enjoy his piece and feel free to comment, below.

copyright, 2014, Ken Malovos
I am 69. About 6 years ago, I started my first novel, CONTEMPT OF COURT. It took quite a while, but I finally got to the point that I decided enough is enough. It was not easy to stop the revising, as it always seemed as if there was something else to add or change. Even today, I think of new ideas or twists that I could have incorporated into my novel. But, I will save those for another day and another story.
I am a lawyer and have practiced law in Sacramento for more than 40 years. Somewhere along the line I promised myself that I would someday write a novel. My legal career started as a public defender for 12 years, and then I was a business litigator for 30 years. A public defender practices in the criminal law field and a business litigator practices in the civil law field. I loved them both, but they were different.
Of the two types of law, criminal law is far more exciting, with constant stories in the newspapers about murders, burglaries, robberies etc. that were going to trial. Sometimes, my more notorious cases would be discussed and I would be quoted as saying something brilliant (or not). Generally speaking, the issue in criminal cases is liberty. Will the defendant have to go to jail and, if so, for how long?
Civil law is less interesting and only rarely grabs any newspaper headlines. It involves torts, contracts and injunctions. Usually the only people interested in a civil case are the two or three parties, e.g., someone suing for damages for breach of contract, a vehicle accident or theft of intellectual property. Generally speaking, the issue in civil law is money not liberty. Will the defendant have to pay the plaintiff money and, if so, how much?
In both criminal and civil law, I have written many legal briefs. I can say that I have always enjoyed writing, more so than any other part of the legal process. But, let’s face it, legal briefs are not the most exciting writings to read.
When I decided that it was time to write fiction, I tried to combine the worlds of criminal and civil law.  The beauty of practicing law for 40 years is that you naturally accumulate a lot of stories. My plan was to take some real-life experiences that I had encountered and bring them to life in a fictional setting for the enjoyment of the reader. The advice that everyone gets is two-fold: first, sit down and write. Write as much and as often as you can. Second, write what you know about. 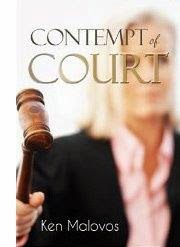 This is a story about a trial lawyer who is confronted with a series of crises, both in and out of court. I used some experiences of mine and others, but I changed the facts to make them more interesting. My first version of the story changed many, many times. Hopefully it got better and better. Not sure about that, but I hope.
Along the way, I spent quite a bit of time learning about the art of writing fiction. I took online courses in creative and novel writing; I attended writing conferences and learned from professionals what was necessary for a good novel. I read countless books on how to write. I have kept them all. They sit on my bookshelf for my occasional reference when I get stuck. As an aside, it is amazing how many good books exist on how to write.  I have listened to several CDs of authors talking about writing. I have probably spent more time learning how to write, than actually writing. But the learning experience has been worth it.
The result, after five years and ten revisions, was my novel, CONTEMPT OF COURT. It is about Mike Zorich, who is a successful trial lawyer in Sacramento and a former public defender (sound familiar?). He is in trouble. Trying to come to grips with the death of his wife, Sheila, from ovarian cancer five years ago, he is now beset with some unexplained and anonymous attacks. He is mugged on the bike trail while out for a morning jog. The mugger takes the keys to his car, steals his car and ransacks his home. His office is burglarized. His car is smashed from behind when he is driving on a freeway. To top it off, a judge holds him in contempt of court in a civil case for no good reason. The authorities are at a loss. It soon becomes apparent to Mike that he is going to have to figure it all out for himself, with the help of his best friend and law partner, Denny Grantham.  Whoever is behind the attacks decides to up the ante, so the challenge is for Mike and Denny to figure it out before someone is killed.
That’s all I can say about my story for now, as I don’t want to give away the good parts.
Looking back, I wished I had written more in college or earlier in my career, if for no other reason, than just to understand the whole creative writing process. There is so much to learn! I recently attended a conference of “LEFT COAST CRIME,” a writer’s conference held each year on the West Coast with about 500 or more attendees. Many readers attend to follow their favorite authors, but the workshops with authors are very valuable and demonstrate all of the different facets of crafting a good story. There were more than 50 panels. There was a panel on dogs in stories, another on unusual amateur sleuths and yet another on forensic analysis and, of course, one on legal thrillers, my genre.
Since taking up writing fiction, I have met many authors through their novels. There are so many different styles. When I read a novel now, it is a different experience for me. I look at style, how characters are introduced and developed, how the plot develops, transitions and tension. I spend a lot of time just thinking about plots and ideas that might be used in another novel.
Scott Turow and John Grisham are the acknowledged leaders of the legal thriller genre, but John Lescroart, Steve Martini, Michael Connolly and many more now populate the field. And there are television programs such as “LA LAW,” “BOSTON LEGAL,” and “THE GOOD WIFE,” among others. All of the stories are about lawyers who are crime-solvers. It is a natural fit, as most criminal defense lawyers are trying to figure out who the SODDI is. SODDI is the acronym for “some other dude did it,” a common response to the inevitable question from the lawyer to the client. “Well, if you didn’t do it, who did?”
It has been great fun. I am never more excited and alive than when I am sitting in front of my computer and writing a new part of a story. This is especially true if I have figured out in advance exactly what I want to write. But sometimes I am creating and writing at the same time. I feel like I am on fire. The time flies by. I don’t eat or drink. I can’t be interrupted, so I will let the phone go to my answering machine. I just write and write. This is a world of pure ecstasy in fiction writing that I never experienced in writing legal briefs. I hope it never ends.
Website: www.malovoslaw.com

Ken Malovos is a mediator and arbitrator in Sacramento, CA. Previously, he was a trial lawyer, a public defender for 12 years and a business litigator for 25 years. He is a graduate of Stanford University (philosophy) and UC Hastings College of the Law. Ken is a past president of the Sacramento County Bar Association and Legal Services of Northern California. He is a panel member for the American Arbitration Association, a fellow in the College of Commercial Arbitrators, a member of the National Academy of Distinguished Neutrals and a member of the California Academy of Distinguished Neutrals. Contempt of Court is his first novel. He lives in Sacramento with his wife. You can visit Ken Malovos’ website at www.malovoslaw.com.

About CONTEMPT OF COURT:
Sacramento trial lawyer, Mike Zorich, is finally coming to grips with the death of his wife from cancer five years ago. There is a new woman in his life. His son is making his way in the business world. His law practice is going well. And he has a new case that promises to be very demanding. Members of the Darnoff wine family are at odds with each other, amidst a divorce and partnership dissolution.

Then things go wrong. Mike becomes the target of some unexplained personal attacks. He is mugged on the bike trail and his house is ransacked. Is it someone connected to the Darnoff case? Is it an old client from his years in the Public Defender’s Office? Is it some disgruntled witness from a trial? To top it off, Mike is held in contempt of court and remanded to jail. The attacks continue and only get worse. The authorities don’t have a clue. Can Mike figure it all out before someone is killed?

Thanks for hosting Ken today. I'm always fascinated when someone starts a new career later in life.

We're delighted to have Ken here today, Cheryl. You are most welcome!