A Christmas Mini-Miracle, by Barb Caffrey 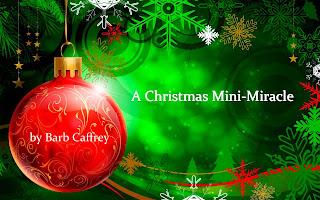 To tell the story of my relationship with my late husband and frequent writing collaborator Michael B. Caffrey (1958-2004), I need to go back to an earlier, simpler time. It was 2001, and it was Christmas. And I hated it.

Why did I hate it? Is it because I hate Christmas? (Hardly.) Is it because I was lonely, and was far away from my friends and family, wondering what would happen next? (Getting warmer . . .)

Well, during the 2001 Christmas season, I was talking to Michael via instant messaging. He and I had met through a mutual friend in July of 2001, but as I was going through a bitter divorce, I didn't pay much attention – excepting one thing: He called me "Barbara" (which is not my name), and I also, unfortunately, called him "Mike" (which was not his name). But once we got past that, we got on like a house on fire, and shared many tales of the books we'd read, the books we were writing, and life in general.

What I didn't know at the time was, Michael had decided right then and there that he was going to marry me. But he had the mother-wit to keep it to himself, as I was very much off men, thank you . . . Jesus Christ himself could've come down from Heaven and said, "Michael is your soul mate," and I'd probably have disbelieved him, as I was just that much off men.

Anyway, Michael lived in San Francisco, while I lived in Iowa. That's why our friendship at this time was conducted long-distance, and mostly consisted of e-mail and instant messaging exchanges.

On Christmas Eve of 2001, Michael and I got into a lengthy conversation that lasted for well over thirty-six hours straight. We talked about all sorts of things, and couldn't bear to stop talking with each other. (Thank goodness for an Internet connection!)

At the end of that conversation, he asked me, "Can we please consider ourselves dating now?" And I agreed . . . not knowing that we'd end up happily married six months later, being able to write together, work together, laugh together . . .

Michael was the most important, influential person in my entire life. When he died suddenly, I was absolutely devastated. He was only 46. He should've had years – the four heart attacks that killed him were without warning. He'd passed a stress test eight months previously, and he was so bright, so talented, such a wonderful person in every possible respect . . .

It was because of the terrible sense of incompletion – knowing that Michael had not had enough time to get his own work across – that I made a vow to get all of his work into print. He'd left behind two novels in various stages of development, one completed novella, and three short stories; writing with me, we'd had our first short story accepted for publication ("Bright as Diamonds" in the BEDLAM'S EDGE anthology, published in 2005), and had finished another story, "Trouble with Elfs," published in 2007.

And, of course, he'd worked with me on my novel ELFY, forthcoming from Twilight Times Books in 2014 – he edited it, helped me figure out the Elfy language (Bilre), culture, mores and more. But perhaps even more importantly, Michael was as proud of my work as he was of his own – so how could I not help him, now that he had passed on and was no longer able to help himself? 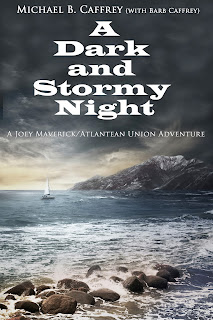 The first thing I did was to write 1400 words of internal monologue into his completed novella in his science fiction/space opera Adventures of Joey Maverick series, A DARK AND STORMY NIGHT, to make it a legal collaboration and a little easier to sell (as it's extremely difficult to sell works by a deceased, unknown author and it's much easier to sell as a collaboration). I tried several markets, but eventually A DARK AND STORMY NIGHT ended up at the Written Word Online Magazine and was published in May of 2005.

Then, in trying to pull another adventure from Michael's oeuvre, I realized I was going to have to do something completely collaborative in order to come up with a stand-alone adventure for Joey Maverick. So with JOEY MAVERICK: ON WESTMOUNT STATION, I added subplots, new characters (one of them a saboteur), and some action to come up with an adventure I hoped people would enjoy, and did my best to remain consistent with Michael's writing style – which is absolutely nothing like my own.

Doing all of that took me over a year and a half, as I needed to research a number of things – feline biology, as one of Michael's alien species, the Kiral, is feline-derived. Bomb-making materials, and a plausible reason someone might get a bomb onto a space station and not be found out immediately. How a space station head of security would act when a lowly Lieutenant who's not even assigned to the station manages to stop a bomb from going off. And I had to figure out how to make all of this work within Michael's premise for the Joey Maverick series, which went something like this: "Joey Maverick's one, notable adventure that everyone knows about is in the novella A DARK AND STORMY NIGHT. Everything else he does is so quiet, no one knows what he's doing."

Or as I decided to think about it, quiet heroism.

Many military men and women do all sorts of things – rescue missions, disaster relief, etc. – that never get written up in the history books because they're considered "minor." Yet without them and their quiet adventures that no one talks about, what kind of world would we be living on? 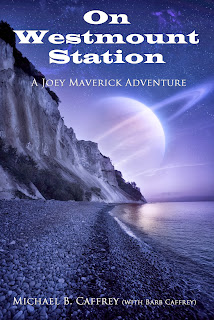 And from there, it's just a short step toward figuring out how to write an adventure that is plausible but definitely would not be something most people would ever know about – as sabotage on a space station is probably the very last thing anyone would want to get out. Instead, it would most certainly be covered up, and would fit Michael's premise as well.

So I wrote the story. Showed it to my first readers. Sent it around . . . and didn't find anyone interested in it for three years.

Then, I found e-Quill Publishing in Australia. They liked Michael's writing and put Michael's two Maverick stories plus his three fantasy stories about Princess Columba and her cat familiar up for sale.

But I found this wasn't the end of the story, either. Because my American friends were having trouble buying the stories through e-Quill – something about Australia's version of PayPal not syncing up with the American version. And then, finally, ELFY was accepted by Lida Quillen at Twilight Times Books . . . which was the main impetus for me ending my relationship, quite amicably, with e-Quill Publishing in 2012.

So what was I going to do with Michael's stories now? Well, the first thing I did was to ask Ms. Quillen if she thought she might like them, but while there was interest in seeing Michael's three fantasy stories, there wasn't any interest in his space opera Joey Maverick series.

And money was tight, as it's been since Michael's untimely passing, so I was worried I'd not be able to come up with decent cover art (as I knew that was essential if I was going to self-publish).

Fortunately, a friend of mine steered me toward iStockPhoto (a great place to look for cover art). I found two photos right away that I felt were perfect for Michael's two stories. Once I had my chosen images, I sent them to a cover artist for lettering that my friend recommended, and got them back quickly.

At this point, the process stalled out yet again as I was unable to get the stories formatted to my liking. This vexed me for nearly a month until I finally decided to post two RTF files at Amazon . . . and no one's yet complained about the formatting!

So this, indeed, is my Christmas mini-miracle. It started in 2001 with that lengthy conversation of ours, and it ended with me finally getting Michael's two stories up at Amazon at the very end of November, just in time for someone to find them for a Christmas present to give to a special someone – or maybe just to give to himself.

I like to think that Michael would be happy with what I've done with his stories. So I'd just like to wish him a Merry Christmas, wherever he is . . . and I hope that when I go to greet him in eternity, he'll tell me he knew I could do it.

A DARK AND STORMY NIGHT
ON WESTMOUNT STATION