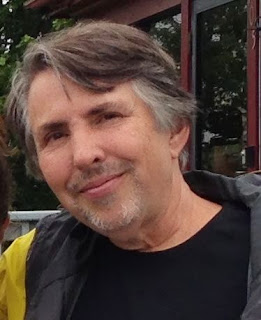 From the wonder of early morning summer walks in the Genesee Valley and an abundance of vegetables and fruits in the garden this year, it's been a very good summer. The grandkids have been over to swim in our little pool, we took a trip to Cape Cod for the first time in nine years, and everyone's been relatively healthy at home. In addition, I was honored to meet Mr. Warren Adler in NYC last month. (see below for details!)

As far as books go, I'm almost done with my twenty-first book. This one is a new style for me. It's a love story, a romantic suspense set on Cape Cod. If you enjoyed the romantic elements in the Tall Pines Mysteries, you might like THE SEACREST, coming this fall. I'll reveal the cover in the next newsletter. ;o)

I also finished the fourth book in the Tall Pines Mysteries, MURDER ON THE SACANDAGA. It won't be out for a little while, since we have to release book three first! SANCTUARY will be out next spring.

All of my books are now in audio book format, including the new writing books. You can listen to samples from all of them here. You might especially enjoy hearing my newest narrator, Mr. George Kuch. I've been told his voice is pure velvet!

If you have any questions about getting the books in any format, don't hesitate to ask.

I was astounded when I learned I'd won a contest entitled "What Reading Means to Me," sponsored by none other than the well-renowned Mr. Warren Adler, author of War of the Roses and many other best sellers. The prize was a two-day trip to NYC and lunch with Mr. Adler at the Century Association, a historical literary club. I had the most delightful time with Mr. Adler, and we connected on many levels, chatting for hours about books, life, and the industry. What made my day, literally, was when he called me a "real writer," not once, but twice. Talk about feeling validated... Aside from my lunch with Mr. Adler, I walked around Central Park (7 miles!) one morning, and saw "Newsies" with daughter Melanie, who came down from Boston to meet me. Although it was close to 100 degrees during the day, we had a lovely time and even enjoyed some special tempura at a Japanese restaurant in Manhattan. I'll never forget the trip, or the incredible joy of meeting this generous and delightful author.

If you are free on Saturday, August 17th, consider coming down to Heron Hill Winery on Keuka Lake to join me for a glass of Riesling and some good conversation. I'll have most of my books there to sign and sell, plus free bookmarks and chocolate! Hope to see you there.

The list of literary awards is growing. We just earned our 16th award, and there are more awards to be announced this year.


Tremolo: cry of the loon –

Email ThisBlogThis!Share to TwitterShare to FacebookShare to Pinterest
Labels: newsletter