The Power of Secrets by Michael Bigham

Jahar Tsarnaev, a popular, seemingly carefree, dope-smoking college student at the University of Massachusetts held a dark secret. He and his older brother planned and executed the Boston Marathon bombings. Not even Jahar’s roommate had a hint that his friend had committed the crime. “I have had almost two weeks to think about it, and it makes no more sense than the day I found out it was him,“ Jason Rowe said in a New York Times interview. “Nothing seemed out of the ordinary.”

We all have secrets. They intrigue us, confound us and as in the case of Jahar they shock us. Secrets drive mystery fiction. Hannibal Lector has a secret passion for human flesh. Hercule Poirot is famous for pulling his mystery suspects together and revealing their secrets one by one until he reveals the biggest secret of all: who is the murderer. When you write your mystery, create secrets. Have your characters guard them closely. They add tension and suspense to your tale.

My mystery, HARKNESS, A HIGH DESERT MYSTERY, is set in the mythical small Oregon town of Barnesville. If you grew up in a small town, you know that small town life incubates mysteries, amplifies them. When a secret is uncovered, it zips through the town like wildfire.

Matthew Harkness, the local sheriff, is a man borne of secrets. His father died when Harkness was eight. He holds the secret of what really happened that night. During World War II, he killed a fellow G.I. who was raping a local native girl. The secret of the killing remains buried in the New Guinea jungle along with the soldier’s body. Early on, we discover that Harkness has yet another secret, he’s sleeping with the local judge’s wife:

“Get your ass down to the courthouse,” Barnes said. “The McIntyre boy has gone missing, and his old man is frantic.”  He went on a bit about how the kid hadn’t been seen in a couple of days, and how I had better hop right on this one. The old man, Jeff McIntyre, was the town dentist, city council member, and a community mover and shaker, just the person to get special treatment from Barnes. While he talked, I juggled the phone and signaled for Kate to light me a cigarette.

I handed the dead phone to Kate. “That was your husband.” The whine of the big mill saw drifted down the valley.

“So I gathered.” Kate wasn’t an especially pretty woman, but more than handsome with Hepburn cheekbones and the rough hands of someone who grew up working on a farm. We’d been lovers for close to a year, but I still hadn’t figured out her relationship with her husband.

Being a man of secrets, Harkness has learned long ago which secrets to keep, which to reveal and how to manage them to his best advantage. In a backwater timber and ranching town during 1952, a gay man, even an upstanding citizen, must hide his sexuality. Coming out of the closet would be a disaster. Here Harkness talks to just such a man.

Harley sat down, his face pale except for two bright red spots on his cheeks. “Why share that information with me?”

“Why indeed?” I said. “I keep thinking about that time a couple of years back when you got roughed up on a buying trip in Portland. I’d always assumed it was probably a trick roll by some pimp. Local yokel goes to the big city and gets in over his head. Not all that unusual.”

“A baseless speculation,” he said.

“Perhaps, and not something I’d speculate about in public, but now I wonder if it might have been something else.  Something a little,” I searched for a word, “a little more extreme.”

“Ah, Judge Barnes,” I said.  “A buddy of mine works for the Portland Police Bureau. I could give him a jingle, get a copy of your report, and find out what really happened. I might be interested in the exact circumstances of the assault.”

“Let’s talk about Joey.”  I lit a fag and instantly regretted it.  Smoke choked the tiny office.

“I can accept that,” I said.  “But do any of your friends like the younger trade?”

“Men who waltz to a different tune,” I said.

“Guilty as charged, your honor,” I said.  “But I’ll do what I must to protect the people in this county.”  I stubbed out my cigarette.

“Harley, make no mistake, I can be a real dick if need be.  Don’t try me.  You’re a good family man, pillar of the community, all that falderal.  Hell, I’ve always liked you, thought you’re one of the saner people in this little burg.  I don’t care who you screw or what sex they are, but you need to tell me anything that might help me with my investigation.  Help me, and I won’t tell your secret.”

“You don’t know anything to tell,” he said.

“Harley, don’t piss me off. Otherwise, I may have a talk with your best buddy Barnes and tell him how you let your hair down.”

Harley became as still as I’ve ever seen a man become.  I could hear the ticking of my watch and Ruth’s voice drifting back from the front of the store.  He had frozen like a fawn waiting for the hunter to pass.
“He knows,” I said.  “He knows, doesn’t he?”

When writing mystery fiction remember that secrets conceal secrets. Harkness has uncovered Harley’s secret, but now we must wonder about the Judge. If he knows, why hasn’t he acted on the information?

Some secrets are even more sordid. A teen-aged girl has fallen prey to the charms of an older man. Harkness interviews a missing boy’s father:

“I’m just trying to understand what happened.  Did Joey know?”

“Not in the beginning.  He found out later.  It was our secret, Virginia’s and mine,” he said.  “You have to understand how she felt.”

“But she wanted more,” I said.

“She wanted to marry me, but she didn’t understand my position. I couldn’t just haul off and do something rash like that.”

Harkness is willing to conceal this ugly crime in his single-minded pursuit of the murderer. Well, at least until the bad guy is caught, then all bets are off.

As in real life, friends don’t tell their friends everything. A person may even commit a crime to protect someone they believe is innocent. In HARKNESS, a black man, Thomas Jefferson Stewart, stumbles into the all white town of Barnesville right after the murder of a white girl and is arrested for the murder. Though Harkness doesn’t believe the man is guilty, he can’t release him from jail. Many in the community already consider Stewart to be guilty. One of Harkness’ closest friends steps in to help Stewart escape and harbors the fugitive; yet another mystery for the sheriff to unravel.

A murderer may use secrets of others to his advantage. Perhaps he blackmails an unwilling accomplice to maintain their silence, threatening exposure and shame. The murderer, of course, hides the secret of his crime, but as in many Agatha Christie mysteries, the murder kills to protect his secrets.

When plotting a mystery, a writer weaves secrets throughout the narrative. Often small secrets bear a tremendous emotional weight. What may be trivial to one person, may be unconscionable to another. Secrets nest into other secrets like Russian dolls. Open one and another confronts you. Don’t base your story on just one secret. Create many. Have your protagonist reveal them one by one, a layer at a time. Readers love hearing juicy tidbits. Use that to your advantage. Play them out one at a time to spice up your story.

My thanks go to Murder by 4 for the opportunity to be guest poster on their great blog. You can contact me at www.michaelbigham.com. 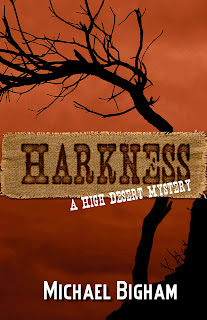 Raised in the Central Oregon mill town of Prineville beneath deep blue skies and rim rock, Michael Bigham attended the University of Oregon and during his collegiate summers, he worked in a lumber mill and also fought range fires on the Oregon High Desert for the Bureau of Land Management. After graduating from college, he swung from being budding hippy to cop work. He's still wondering about how that came about. He was a police officer with the Port of Portland and after leaving police work, he obtained an MFA degree in Creative Writing from Vermont College. Mr. Bigham lives in Portland, Oregon with his wife,  daughter and a spunky bichon frise named Pumpkin. He's had short stories published in two Main Street Press anthologies. Harkness is his first novel.

Michael, welcome to MB4 today! We're honored to have you. Your book sounds intriguing! I will be off to check it out this morning. Thanks for guest blogging with us!

Thanks for hosting Michael today. I'm in the middle of his book and I'm totally captivated by it. I can't say Harkness is my favorite character, but he's growing on me.

Gosh, thanks for the opportunity to post here. In my opinion, Murder By 4 is a top flight mystery blog and I'm honored to be your guest.

Michael, you are most welcome! You must come back to us when you publish your next book, too. Loved your article!

This sounds like a great book, Michael! thanks for being on Mb4 today!