There are a few items that all writers should know before tackling a big project like a novel.

One of the most important being how to structure a story. Every good story has parts to it that are kind of requisite. Like rising and falling action for the plot line (s) and GMC *goal, motivation, and conflict* for the characters.

But if you don't know where to put in all that goodness, and why, you are missing out on a very big deal in writing.

Take the Devil Wears Prada for example. *I know I am WAY behind on movies* but this one really caught my eye as I was studying story structure. 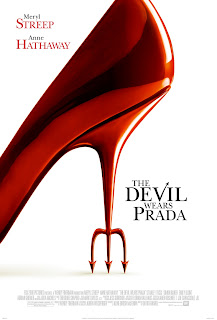 First of all, the main character, Andrea, or Andy, lives in a sort of duh-dump world. She is just average. Average education, average apartment, average kind of boyfriend, average sort of life in total. And then bada bing! She gets a job at Runway. The most glamorous magazine in fashion. As the assistant to the head editor, Miranda Priestly. Who was played by none other than the fabulous Meryl Streep. Can anyone do bad meanie better than MS?

First thing in writing, item numero uno, the character's real world. Here we see a reallllllly good comparison between Andy's regular world and her work world. One is just common, and one is amazing and as they say over and over in the show, the job that every girl in the world wants.

This is also known as the HOOK. Every one wants the job that Andy just landed, and she is not that into it. What???? Now what reader(or movie-watcher) isn't "taking the bait" at this point? Hence it is called the hook. We want to know what happens next. Will Andy do something magic or will she end up throwing up on the million dollar desk where Miranda sits?

Tune in next week, Murderers. I will try to 'spain what a plot turn is.
Posted by Kim Smith at Thursday, January 24, 2013

Kim, this is great! I can't wait to see what your next tip will be. Wonderful for all writers alike. Thanks and have a great weekend. ;o)