Excerpt from FOR THE BIRDS

We have been going a little crazy here at MB4. What with the holidays and other unexpected items that have popped into our lives, from "day job" challenges to health issues, it's been a bit of a rough patch.

I started an article for today's post, a tutorial for authors regarding how to get their books into audio book format, but ran out of time. (two books signings this weekend, phew). I also have one started on eBook formats. It's getting kind of confusing (for me, anyway) and I wanted to sort it all out. Anyway, I'll post them soon, I promise.

But today I just plain ran out of time.

So, here's the first chapter of FOR THE BIRDS. It just came out in November, and I'd love to have your thoughts on it!

Have a healthy, blessed Sunday and remember -- if you love to write, write like the wind! 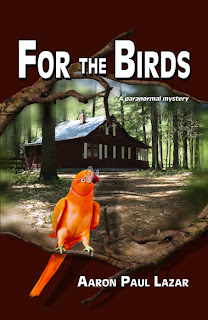 Chapter One
The remote Adirondack dirt road twisted and turned into the wilderness, drawing us further into the boonies. Blue mountains crested the distant horizon, and tall pines hugged the road on both sides. We’d seen no houses, no gas stations, and no people. Our hotel was nowhere in sight, and we’d been on the hilly dirt road for over an hour.

I turned to my husband. “Check the map again, will you, hon?”

The road dipped into a dangerously steep gully. Quinn grabbed his armrest and I maneuvered the van through the trench at the bottom, hoping no one was coming in the other direction. No way could two cars make it through this stretch.

He unfolded the coffee-stained map. “It’s supposed to be right ahead.”

When we’d started our journey, my beautiful husband had reminded me of an Indian brave on the cusp of a great adventure. This was mostly thanks to his Seneca mother, who bequeathed her dark skin and strong Native American features to her only son. He’d worn the hand-sewn turquoise bolo tie I’d given him for Christmas over an unbuttoned crisp white linen shirt, his favorite old jeans, and comfortable moccasins. His clear turquoise eyes had darted with purpose, excited about our adventure. It was those same spectacular eyes that matched the stone in the bolo—and they were the only part of his appearance that came courtesy of his long dead English playwright father.

But now he sat rumpled and sweaty, and I was sure he was ready to kill me for not agreeing to buy that GPS yesterday. I’d pushed for the free Road-Mapper directions.

Instead, he neatly refolded the map to its original condition. I’d never figured out how he could do that. My map folding skills always resulted in a fat bunched up wad of crinkled paper.

I wondered if I would actually escape the reminder that I’d been a penny-pinching idiot.

He said it under his breath, but I heard it. “Maybe we should’ve bought that GPS.” He blotted his forehead with his sleeve and cranked up the air conditioning.


I didn’t dare tell him it wouldn’t do any good. The guys at Monroe Muffler told me the system needed to be recharged. I’d decided against that outlay of cash, too, trying to save a few pennies.


I swung the van around the next crater, and was about to congratulate myself for my expert driving skills when a series of washboard ruts nearly popped the fillings out of my teeth.

Quinn braced himself on the dash. “Want me to take over?”

We reached level ground again and I glanced at his strained expression. “You hate it when I drive.”

His mouth tightened. He knew it was true. He nagged me about my speed, about traveling in the passing lane, and about my tailgating.

“No. Really. I’m just thinking about you, babe. Aren’t you tired?”

Another giant pothole threw me against the side window, cracking my head against the glass. A slew of nasty words almost came out, but I held them in, gripping the wheel with my sweaty hands. If I swore in front of my mother, I’d never hear the end of it.

I glanced in the rear view mirror to check on her. In spite of the jolts, she was still asleep in the captain’s chair. For a panicky second, I wondered if she’d died in her sleep. She quickly dispelled the notion by trumpeting several ungodly snorts.

I lost focus when I looked back at my mother, and reacted too late to avoid the next pothole. The shocks ricocheted and bounced me out of my seat. My seatbelt snapped and I held my breath, half-expecting the airbags to inflate.

I jerked the car around a big depression and drove onto the bumpy grass on the side of the road, hoping we wouldn’t sink in and get stuck in the middle of no man’s land.


The partially functioning air conditioner was getting worse. I squirmed on the sticky vinyl seat and repositioned my death grip on the wheel. My dress was riding up, my underarms were soaked, and my head throbbed. I badly wanted a cool swim and a cold Mohito, but especially didn’t want to admit to Quinn that we’d probably never see civilization again.

Our hotel should have been just around the bend—a half hour ago—but the absence of traffic confirmed my fears. We’d never get off this God forsaken road.

The van chugged along the shoulder like a tortoise mired in molasses. An occasional pristine lake glimmered behind the trees, and I was half tempted to stop the car, abandon my husband and mother in the van, strip naked, and plunge into the water. I’d swim away from it all. From the dusty road. From my grumpy mood. And from the pain I still felt after the death of my stepfather three months earlier.

Instead, I fumed in my seat and kept driving. After ten minutes of avoiding pits and crevices, I spied a Grand Canyon-sized pothole up ahead where the road had washed out.

Quinn’s eyes widened when he saw it. He pulled back a long strand of his glossy black hair and tucked it behind his ear, trying to look unruffled. “Babe? How about it? Wanna switch?”

I really should have let him take over an hour ago, but if you haven’t noticed already, I’m stubborn. And I always need to prove I can DO it, even if I can’t do it.

I stuck out my tongue and pulled over. “You know you’re a control freak.”

Quinn gave me a good-natured smile. “That’s me.”

Damn him. Always so sweet.

A billowing gray cloud followed us. We’d been kicking up the dust for the past half hour, and I pitied the poor slobs who’d been traveling in our wake. I glanced in the side mirror to check again for the annoying white truck that had been following us off and on since Utica. They disappeared a few minutes ago, but my mother, who has insisted I call her Thelma since I was three years old, had been obsessing over the evil intentions of the truck before she finally took a Xanax and fell asleep.

I slid the lever into park and shut off the engine. Grumbling, I unbuckled my seatbelt and caught my reflection in the mirror. I looked like a snarling gargoyle. In a flash, a realization hit me.

Quinn’s not the control freak.

Okay, there you have it! Let me know what you think, below. This is my first series written from a woman's POV, so I'll be interested to hear your feedback if you read it. 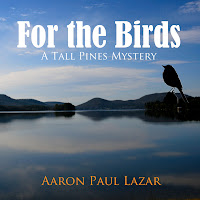 Listen to a free sample of the new audio book - coming soon from Audible.com!

Sounds promising. I'm a fan of mysteries with animals and the title caught my attention. I don't think that hotel is just around the corner....suspense has been built up and I wonder what comes next...

Thanks, Harvee. This one was a fun one to write. I always have animals in my books - 'cause I love them so much. LeGarde Mysteries feature Max, Boris, and Sheba (dogs), Maggie and Diablo (horses), Tristan and Ginger (cats) and Rascal (rooster.) They're always running around in the background. In Moore Mysteries, Sam and Rachel Moore have a white cat, Lila. And in this Tall Pines series, there's of course Ruby, who's on the cover here, and in books 2 and 3 we introduce some Bernese Mountain dogs! Thanks for stopping by and enjoy your Sunday. ;o)

Small Birdcages can lead to injuries at it may try to escape and get its body parts stuck in between the bars of the cage causing injuries to it's beak, foot or wings. The thickness of the bars can be of prime significance since birds may well bend or even break bars that are too thin.

Hi, Larry. Thanks for the tips. I am sure that my characters have large cages for Ruby! ;o) I've never owned a bird before, this is pure fiction.

The POV works well; I always have my wife go over my female POV tales, just to make sure they're genuine!
Write1Sub1 RELOADED