Mask of the Serpent - another great House Phoenix series novel by S.W. Vaughn 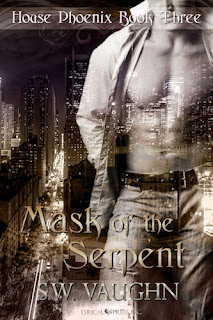 Our dear and prolific S.W. Vaughn has done it again. Mask of the Serpent - the newest in the House Phoenix series - has just become available at Lyrical Press. For those of you who love to be simultaneously shocked and entertained, who love to shiver at the thought of such nastiness, who don't care about sleeping... you'll love this series. You'll likely fall for Angel, S.W.'s protagonist, and stay awake at night to find out how he survives each book.
But let me warn you about Jenner. He bites.
Well, okay, so he doesn't bite. But he sure as heck will invade your dreams and scare the hell out of you. I love the last line of the release, below. "Contains violence, nasty language, and torture." Yep. That's our girl.

Here's to a writer who pops out so many high quality books in a year that we're all wondering how she does it. Kudos, Sonya!

- Aaron Lazar
MASK OF THE SERPENT by S.W. Vaughn

No matter who loses, the bad guy wins

Drug lord and self-professed saint Diego Mendez is a man of his word. He's watched two of his lieutenants die, thanks to Angel and House Phoenix. Unfortunately, he's promised a certain crooked cop that he won't seek revenge unless Phoenix hits him first. When Angel makes a run on his turf, Mendez decides it's enough of a loophole to act. He kidnaps Angel's lieutenant, Jenner, intent on breaking him—and killing him.

But Jenner is just as nasty and mean as Mendez, and breaking him is no easy task. His secret past has conditioned him for survival at any price. And Mendez has a secret of his own—his son is dying, and he's been reduced to watching helplessly while it happens. One of them will triumph, one will fall. But in this game, no matter what happens...the bad guy wins.

'Stay awake at night'...try being her editor! Each story is so gripping, while working, I continually forget to edit because I'm lost to the world she's created. SW Vaughn sets the standard to which all others in the genre should be held. The stories have such intensity, surprise the reader at every turn, and her characters live on in the imagination long after the ending. Yup. I'm biased. For good reason. Read Mask of the Serpent and you will be too. This is not a shameless plug. Just sayin'...