One of the sweetest parts of getting back into the workforce this week has been the ability to read whole books at a time while traveling. Okay, so ignore the fact that I'm falling asleep on my keyboard because I only got three hours sleep on the plane last night. (That's not drool. Honest!) Ignore the fact that I miss my family so much it's already killing me. Ignore the fact that I ate so much rich German food tonight, I think I'm never going to eat again. Let's ignore all that stuff and let me tell you about my mentor, John D. MacDonald.

How many of you have had the pleasure of reading his mysteries? I'm particularly fond of the Travis McGee series, and while choosing from my collection of books to be read en route and back from Germany, I picked a couple of easy-to-carry paperbacks. I've read most of the Travis McGee books, and this one is all torn up from all the times I've read it. But each time, I find a new and astonishing twist of words that leaves me breathless, and inspired. Damn, he's good. (Did you know he also inspired Dean Koontz?)

I want to share a few excerpts from this book to entice you to buy one of them. Do yourself a huge favor, and next time you're at the library or checking out books at a yard sale, pick up a dozen. Or two. Here's a photo of the window sill next to the table I sat at last night at the restaurant in my little guesthouse. 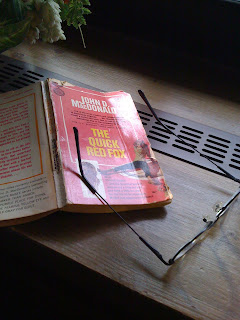 My particular copy was a yard sale find. The previous owner had also read it until it was tattered. I just noticed the original price on the torn cover - 50 cents! Printed right there on the cover. Of course, I probably paid a quarter for it. A steal, if there ever was one. (Read a history about this prolific writer who produced over 70 books!)

I think my favorite aspect of MacDonald's writing, in addition to his astute human and political observations, are his descriptions of people.

"I had not expected her to have such a genuine flavor of youthfulness. By every way I could measure it, she had to be about thirty-three. Yet she was a young girl, and not in any forced way. She had the slimness, the clear-eyed look of enormous vitality, the fine-grained and flawless skin, the heavy swing of burnished hair. Her impact, so carefully measured it seemed unaffected, was of a kind of innocence aware. A gamin sparkle, hinting at a delicious capacity for naughtiness."

Do you see how he just plain talks right to you, with no fancy words or sentence structures in the beginning? He often uses "She was," or "It was," and sometimes repetitively. It's effective, and unlike what lots of us have been shamed out of doing by the current day writing elite who frown on the "wuzzies," or using too much of the "to be" verb in construction. Yet, it doesn't bother me a bit here. It seems to make his writing more honest, more like a head-to-head chat.

Then we move into the description that seems to swell and grow with each new phrase. By the time I read, "a gamin sparkle," I was nearly salivating with not only envy for his talent, but possibly with lust for the women he described. (grin)

One of the things I love about Travis McGee is that he didn't fall for this obviously calculating beauty. No, he fell slowly in love with an almost plain gal who grew more and more beautiful the more he knew her - inside. Now, that's my kind of hero.

Near the end of the book, McDonald describes Ulka Atland M'Gruder in this way:

"...Her tilted gray-green-blue Icelandic eyes were the cold of northern seas. Her hair was a rich, ripe, heavy spill of pale pale gold, curved across the high and placid brow. She had little to say, and a sleepy and disinterested way of saying it. Her eyes kept seeking out her husband. Over all that stalwart Viking loveliness there was such a haze of sensuality it was perceptible, like a strange matte finish. It was stamped into the slow and heavy curve of her smile, marked by the delicate violet shadows under her eyes, expressed by the cant of her high, round hips and the way she stood." (And no, I didn't omit the comma you might have expected after the first "pale." I think it works better that way, and highly approve of his lack of separation of the identical word used for emphasis. Not that this genius needs my approval! Ha!)

There is so much more in this section, I wish I could share the whole page with you. Before you think, "Damn, he's such a womanizer," think again. Travis deeply loves the women in his life. He cherishes them. He respects them. And he has a great way of making the seemingly innocent beauties into absolute horror shows. I won't spill the beans any more, in case you read the book.

Here's one more segment that caught my eye.

"Later I sat near Ulke in a big game room in the house, while she carved and chewed her way through a huge rare steak, knife and teeth flashing, jaw muscles and throat working, her eyes made blank by a total concentration on this physical gratification. The effort made a sweaty highlight on her pale brow, and at last she picked up the sirloin bone and gnawed it bare, putting a slick of grease on lips and fingertips. There was no vulgarity in this hunger, any more than when a tiger cracks the hip bone to suck the marrow."

How many people eating steak did this bring to your mind? I could see that grease shining from her fingertips and the white bone flashing in the light. Couldn't you? He really nailed it, and it was particularly effective when paired with such an "ethereal" beauty as Ulke.

Here's an example of MacDonald's sudden insertion of wise philosophical observations. He's talking about the characters going horseback riding, and thinks he has the killer in his sight. He's worried about something happening to the innocents who ride with them. His horse gives him fits. And while he keeps an eye on the supposed villain, he had doubts about his theories, realizing that the guy could maybe be innocent. It ends with this:

"Violence is the stepchild of desperation."

Where does he come up with this stuff? It's so poignant, and so true. And he just tosses it out there for us, like a gem dangling at the end of a perfectly normal paragraph.

I think when I get home I'll dig out a few more Travis McGee books, and hope some of this talent rubs off on me. Damn. I want to be that good. I really do.

P.S. Just for grins, here are a few pix from my first day and a half in Germany. I had a good day at work, today, meeting everyone and learning more about the products we make. Sadly, my insides weren't cooperating enough to fully enjoy the meals, but look how beautifully presented the dishes are: 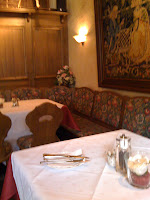 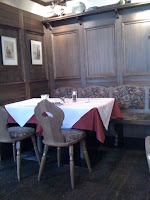 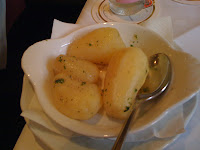 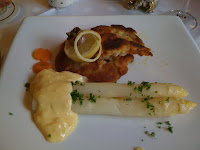 White asparagus is a delicacy in Germany. 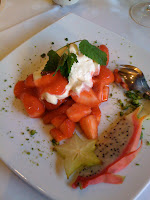 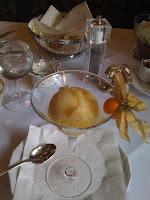 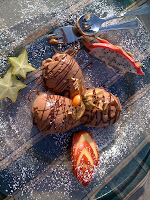 Vanilla ice cream with passionfruit!       The sorbet to cleanse the palate.    Chocolate mouse - an artist must live in that kitchen! 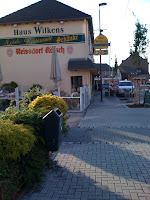 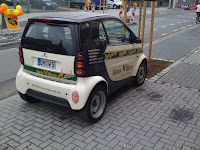 You know, for some reason I always thought John D. MacDonald wrote Westerns. LOL. Now I'm gonna have to check him out...

Ah, Aaron, you've discovered my hero. I have all his Travis McGee books. A master storyteller. And for a bit of a nonsensical twist find The Girl, The Gold Watch and Everything. A prolific writer.

Hi, S.W.! You probably got that impression because of lot of his books were marketed as what they called "pulp fiction" and they had those covers that also were like another western author. Ha!

JD - Oh, yeah. Travis was my long time hero, my parents had his books laying around all the time, beside Rex Stout, Agatha Christie, and so many more. I've always loved JD and think he may have been my best writing instructor of all. ;o)