Excerpt from Fires of Nuala, by Cat Kimbriel

This holiday season we are featuring guest blogs from a number of authors. We want to offer you cool books to check out for yourself or gifts, and also give these great authors a chance to crow a little about their works!

Please help me welcome prolific author, Cat Kimbriel, who shares an excerpt from Fires of Nuala. 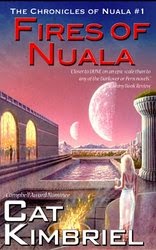 On the planet Nuala, the scam that beguiling free-trader Silver has come to join has just been blown to the skies, along with the throne lines of three separate sovereign nations.

The last male heir of one throne line, Sheel Atare, is unprepared to rule, but he's quick to seize allies wherever he can—like the beautiful and dangerous Silver.

Now Silver has to choose: stick to the scam, or get sucked into the struggle to save Nuala—and Sheel Atare's life.

* * * * * * * * *
Mailan had reached the terrace when she heard the crash. Instinct took over; dropping her assorted bundles, she drew her cat knife and threw herself through the open doorway.

A jumbled scene littered the floor. Seeking Sheel first, Mailan found him on his knees, a cat knife gripped tightly in one hand. He had the tip of the blade pressed into the throat of a guaard. A guaard? Glancing around quickly, she saw Jude crouched, both knives held in throwing position, her gaze on—

"Crow?" Mailan's surprise sounded shrill. Vision widened, taking in the entire room. Pressed against the inner door, the off-world woman waited, the color of her face rivaling alabaster. Crow was almost as pale—and confused. He clearly had no idea—

"Seri?" Mailan ventured, wondering if she should speak, and if so, what were the proper words. Sweet Mendülay . . .

"Did you send him here?" Almost conversational, Sheel's tone.

"No. I sent him to the palace to speak to your sisters."

"Did you tell him where we were?"

"Then what" —Jude, rising now, her exasperation evident— "were you doing creeping around in the bushes?" Her voice easily rose an octave from start to finish, even as she gestured for Mailan to close the terrace doors.

"Common sense. I checked a few other places on my way. Where you spent the night was not important—the current location was the major thing. And unless you went to the Ragäree's retreat—" The knife pressed closer, and Crow stopped his careful recitation. "I doubt anyone else would guess.  I have met you after duty before, Mailan. I knew where to look."

"Why were you creeping around the windows?" Again, that gentle speech pattern, which always meant Sheel was fighting anger.

Crow actually rolled his eyes. "Because I did not want anyone to see me sneaking around the temple grounds, of course. I did not intend for the entire guaard and local enforcers to find the place. Mailan wanted it kept quiet."

"Then why did you come?" There was no way for Mailan to warn Crow that his life depended on the answer to her question. Why Sheel was acting this way was unimportant. To those who knew him, he was on the edge of violence.

"Because . . . whatever you were doing, you needed help. You were—are—a mess, and one alert guaard on an heir is not enough." The youth was completely relaxed as he directed the last to Mailan; he had even dropped his knife, drawn instinctively when he was jumped, if his story was true. If? Could she doubt him? Why had she not confided in him?  In more lucid moments she would have known he would read her worry.

Glancing over at Jude's defensive posture, Sheel drew his steel away from Crow's throat and reversed the blade, holding it point down between them. Crow did not risk looking away; his gaze still meeting Sheel's, the young guaard reached to wrap his right hand around the offered hand and hilt.

"On this I swear," Crow began, the whisper slowly gathering volume, "by life and honor, by blood and trust, that with this oath I will serve the son and daughter of Atare, obeying all words and following all leads, shielding their line and prizing their secrets as Mendülay guards mine own, for so long as they hold to their charge."

Mailan's knees felt weak. That oath—the sharing of oaths, the duty accepted by each at the feet of their Atare, the moment they were chosen to become guaard.

Sheel responded by folding his left hand over Crow's. "On this I swear, by life and honor, that I will take you as a guaard to serve Atare within the bounds of your oath, holding your trust as I hold to my charge—head, hand, and heart of the heirs, now and forever."

The group remained frozen in their tableau for several moments. Finally Mailan moved, reversing her grip on her cat knife. Noticing her action, Sheel sat back on his heels and shook his head.

"No, Mailan. I only ask for that oath once. And you . . . ‘spoke’ . . . for Jude." Grinning suddenly at Crow, he released his grip and added: "You did not have time to speak for him." Standing and turning his back to Crow, Sheel stretched, loosening massively constricted muscle. Glancing at the off-worlder, he said in Caesarean: "It is all right. No one is going to die."

Katharine Eliska Kimbriel reinvents herself every decade or so. The one constant she has reached for in life is telling stories. “I’m interested in how people respond to choice. What is the metaphor for power, for choice? In SF it tends to be technology (good, bad and balanced) while in Fantasy the metaphor is magic – who has it, who wants or does not want it, what is done with it, and who/what the person or culture is after the dust has settled. A second metaphor, both grace note and foundation, is the need for and art of healing. Forthcoming stories will talk about new things that I’ve learned, and still hope to learn … with grace notes about betrayal, forgiveness, healing and second chances.”  A Campbell Award nominee.

Great excerpt from a great writer. Thanks for sharing it with us, Aaron! (And thank you for writing it, Ms. Kimbriel.)

Thank you, Aaron and the gang, for welcoming me to Murder by 4. A lot of bodies drop in this book, so I feel right at home!