Under the Eye of God by Jerome Charyn

When Tribute Books contacted me to do a review for Jerome Charyn's Under the Eye of God, the title intrigued me so much I jumped on the chance. That, and the fact that I was out of something decent to read at the moment. As has been the trend, TB hasn't steered me wrong with books to read before. They have all been dynamite reads.

I liked this book, Under the Eye of God, I really liked it. Because I have never read an Isaac Sidel book before, and as he is driving this bus, (I should have uncovered him in a prior work-really, where HAVE I BEEN?) I came to appreciate him in ways others who have not been so remiss might not. He is a bigger than life character, and complex, and vivid.

Charyn writes with a knowledge of New York like nobody's business. There is no questioning he knows the city. And his efforts to inject that knowledge into this novel shows so that you are mentally right there. Charyn's mastery of plot structure and characterizations were excellent as well. I liked his references to incidents in historical places and events of the past, some I've even lived through (i.e. Vietnam). The story move to Texas was an easy transition, necessary for the political aspect of the story, (and some other plot lines that I cannot tell you about or spoil it~!!)

The story didn't move as fast as most of today's crime thrillers, with their high stakes and high action, but it was a change that interested me. I still cared about Isaac Sidel. I felt like he was truly in danger when the action ramped up. The treatment of the Ansonia was (to this ole Southern gal) done well, so well, I was there! A good thing, too, as the setting in that old building colored everything that happened from that point onward. (it reminded me of the Peabody here in my little burg).

The friendships forged at the Ansonia fizzled, then rekindled, then took a downward turn keeping the reader guessing about their strange alliances. I wanted them to be friends, but frenemies they became and as always, with a cool ending in mind. Isaac Sidel's delight in the woman, Inez/Trudy, was truly a love-gone-wrong. She was used as bait, and reminded me of the old days of movies where Humphrey Bogart peered into the camera with a cigarette dangling from his lips, sadness in his eyes. (Inez/Trudy was the most likable character in the book, in my opinion. A bombshell straight out of pulp fiction-which may be Mr. Charyn's finest writing talent).

As this was my first of Charyn's books, I felt a little out of my element, and for that I apologize. My first travels into the world of the man they called Mr. President came late to the game, but I had no trouble catching up. Although it is a part of a series it is a good stand-alone also.

I would recommend this book to those who love crime fiction/thrillers, Isaac Sidel fans, and people who love books that show that -how shall we say- seedier side of life? 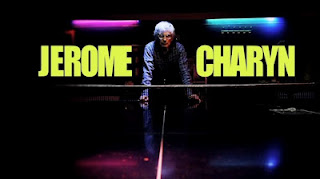 Under the Eye of God blog tour site:
http://undertheeyeofgod.blogspot.com/


Under the Eye of God Book Summary 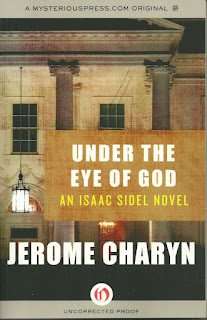 After decades of madness in the Bronx, Isaac Sidel visits the craziest state in the country.

Isaac Sidel is too popular to be America’s vice president. Once the New York Police Department commissioner, he became the most beloved mayor in the city’s history—famous for his refusal to surrender his Glock, and for his habit of disappearing for months at a time to fight crime at street level. So when baseball czar J. Michael Storm asks Sidel to join him on the election’s Democratic ticket, the two wild men romp to an unprecedented landslide. But as the president-elect’s mandate goes off the rails—threatened by corruption, sex, and God knows what else—he tires of being overshadowed by Sidel, and dispatches him to a place from which tough politicians seldom return: Texas.

In the Lone Star state, Sidel confronts rogue astrologers, accusations of pedophilia, and a dimwitted assassin who doesn’t know when to take an easy shot. If this Bronx bomber doesn’t watch his step, he risks making vice-presidential history by getting killed on the job.

Jerome Charyn's Bio:
Jerome Charyn (b. 1937) is the critically acclaimed author of nearly fifty books. Born in the Bronx, he attended Columbia College, where he fell in love with the works of William Faulkner and James Joyce. After graduating, he took a job as a playground director and wrote in his spare time, producing his first novel, a Lower East Side fairytale called Once Upon a Droshky, in 1964.

In 1974 Charyn published Blue Eyes, his first Isaac Sidel mystery. Begun as a distraction while trying to finish a different book, this first in a series of Sidel novels introduced the eccentric, near-mythic detective and his bizarre cast of sidekicks. Charyn followed the character through Citizen Sidel (1999), which ends with his antihero making a run at the White House. Charyn, who divides his time between New York and Paris, is also accomplished at table tennis, and once ranked amongst France’s top Amazon10 percent of ping-pong players.

Email ThisBlogThis!Share to TwitterShare to FacebookShare to Pinterest
Labels: crime fiction, jerome charyn, thrillers, under the eye of god

Kim, can I just say I love your reviews? You make me feel like we're in the same room chatting about a book. And I'm beyond delighted that I was able to introduce you to the work of Jerome Charyn. You're absolutely right - no one writes New York City better than him. So glad you enjoyed his latest Isaac novel :)

Thanks for sharing with me, Nicole. Looking forward to more!