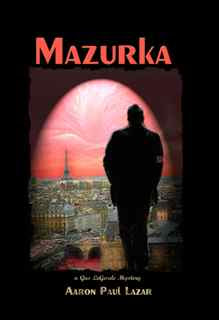 Some things are just worth waiting for. Whether you're an author or a reader, it seems inevitable that "the next book in the series" seems to take forever when its going through the publishing process.

In Mazurka's case, it really did take forever. The first draft was written in 2002, and after many ups and downs and starts and stops, it was scheduled to come out in mid 2008. Because of the economic uncertainties, many books, including Mazurka, were delayed.

Finally, the wait is over. Today I received the first fifty copies of Mazurka: a Gus LeGarde Mystery. From Paris, to Vienna, to Germany, and finally to the Austrian Woods, Mazurka propels you on a hair raising ride through Europe while Gus and Siegfried fight with Nazis on the Champs Élysées and a steamy shocking secret is revealed about a famous 19th century composer.

Do you like the cover? It's a conglomeration of many photos I've taken over the years, including shots of Paris from the balconies of Notre Dame. I did a bit of sneaky photoshopping to give it a liquefied blood red sky and river, and produced the Nazi on the cover from a silhouetted image of a man I photographed in Germany a long, long time ago. He wasn't a Nazi. At least I don't think he was!

If you've read Double Forte', Upstaged, and/or Tremolo and long for a wild roller coaster ride through Europe (with a few nice stops at museums and great restaurants!), email me at aaron.lazar@yahoo.com for autographed copies for twenty dollars including tax, shipping, and handling.

You can also buy it directly from Twilight Times Books and get a super deal starting October 1st. (one of the deals is: Buy Mazurka for $15.15 and get Tremolo for $10.15 (a 40% discount!) plus tax and shipping.)

When Siegfried receives a puzzling invitation to visit an ailing relative in Germany on the eve of Gus and Camille’s wedding, their honeymoon plans change. Siegfried–Gus’s socially challenged brother-in-law–can’t travel alone, so they gather the gentle giant under their wings and fly to Paris.

After luscious hours in the city of lights, a twist of fate propels them into a deadly web of neo-Nazis. A bloody brawl on the Champs Élysées thrusts Siegfried and Gus into the news, where a flawed report casts Siegfried as the Nazi leader’s murderer, sealing his death warrant.

There are several hundred more copies of Mazurka on their way, and I'll sign and send them out on a first come, first serve basis. By the end of the month, you'll be able to order on Amazon and Barnes and Noble (you can preorder at B&N already). But if you want the book signed, you need to go through me.

If you've already pre-ordered a signed copy, don't worry. You're at the top of the list! I'll be contacting you shortly. If you think you've ordered one and don't hear from me, give me a shout! I'm trying to keep it all together, but sometimes things slip through the proverbial cracks.

If you haven't ordered yet and want one, please send me the following:

Last of all, I want to thank the fans who've stayed the course, who've patiently waited for this book to come out. I appreciate that your love for Gus LeGarde hasn't faded over time, and that you're still anxious to see what happens next. (by the way, for all the ladies who have begged for a wedding scene, I answered your request and added a "flashback" wedding scene to Mazurka!) 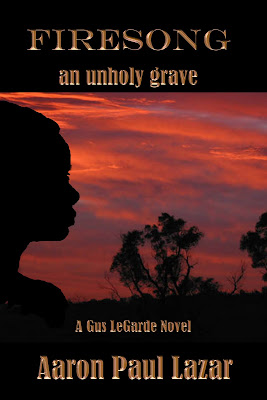 Now we can all start waiting for Firesong: an unholy grave, the fifth in the series of nine completed (so far.) Firesong was just accepted by Twilight Times Books this week and is scheduled for release next year. Would you believe I'm writing my 14th book now, a sequel to Tremolo? Let's hope it comes out quickly!

To read an excerpt of Mazurka, go to:

Mazurka's up for a cover award!

Voting is now open for the August COVER Awards. Voting will close on October 3rd and new entries will be posted a week later.

Go here to vote if you'd like to support the book. At the top of the page, there is a tan colored column with books titles and voting buttons. Click on #20 (if you like Mazurka's cover best!) and then scroll down to hit the "Vote" button. Many thanks in advance for those who elect to vote. ;o)

Most of the book signings and book club events for the year are over. But here's what's left!

Poetry, Prose, and Anything Goes

A Book and A Chat"

Email ThisBlogThis!Share to TwitterShare to FacebookShare to Pinterest
Labels: mazurka

Great success come to those who wait. Lifting my coffee mug to you this morning Aaron !

A huge congrats, Aaron. All good things happen in their own time. ;)

Thank you, dear Ladies. You are the best!