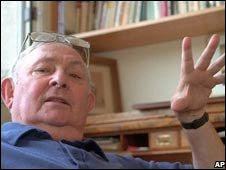 Hillerman's daughter, Anne Hillerman, said her father's health had been declining in the last couple years and that he was at Presbyterian Hospital in Albuquerque when he died at about 3 p.m.

Hillerman lived through two heart attacks and surgeries for prostate and bladder cancer. He kept tapping at his keyboard even as his eyes began to dim, as his hearing faded, as rheumatoid arthritis turned his hands into claws.

Anne Hillerman said Sunday that her father was a born storyteller.

"He had such a wonderful, wonderful curiosity about the world," she said. "He could take little details and bring them to life, not just in his books, but in conversation, too."

Lt. Joe Leaphorn, introduced in "The Blessing Way" in 1970, was an experienced police officer who understood, but did not share, his people's traditional belief in a rich spirit world. Officer Jim Chee, introduced in "People of Darkness" in 1978, was a younger officer studying to become a "hathaali" Navajo for "shaman."

Together, they struggled daily to bridge the cultural divide between the dominant Anglo society and the impoverished people who call themselves the Dineh.

Hillerman's commercial breakthrough was "Skinwalkers, " published in 1987 the first time he put both characters and their divergent world views in the same book. It sold 430,000 hardcover copies, paving the way for "A Thief of Time," which made several best seller lists. In all, he wrote 18 books in the Navajo series, the most recent titled "The Shape Shifter."

Each is characterized by an unadorned writing style, intricate plotting, memorable characterization and vivid descriptions of Indian rituals and of the vast plateau of the Navajo reservation in the Four Corners region of the Southwest.

The most acclaimed of them, including "Talking God" and "The Coyote Waits," are subtle explorations of human nature and the conflict between cultural assimilation and the pull of the old ways."

I want Americans to stop thinking of Navajos as primitive persons, to understand that they are sophisticated and complicated," Hillerman once said.

Occasionally, he was accused of exploiting his knowledge of Navajo culture for personal gain, but in 1987, the Navajo Tribal Council honored him with its Special Friend of the Dineh award. He took greater pride in that, he often said, than in the many awards bestowed by his peers, including the Golden Spur Award from Western Writers of America and the Grand Master Award from the Mystery Writers of America, which elected him its president.

Hollywood was less kind to Hillerman. Its adaptation of his 1981 novel, "Dark Wind," with Lou Diamond Phillips and Fred Ward regrettably cast as Jim Chee and Joe Leaphorn, was a bomb.

Although Hillerman was best-known for the Navajo series, he wrote more than 30 books, including a novel for young people; the memoir, "Seldom Disappointed" ; and books on the history and natural beauty of his beloved Southwest.

"Those places that stir me are empty and lonely," he wrote in "The Spell of New Mexico," a collection of his essays. "They invoke a sense of both space and strangeness, and all have about them a sort of fierce inhospitality."

He also edited or contributed to more than a dozen other books including crime and history anthologies and books on the craft of writing.

Born May 27, 1925, in Sacred Heart, Okla., population 50, Tony Hillerman was the son of August and Lucy Grove Hillerman. They were farmers who also ran a small store. It was there that young Tony listened spellbound to locals who gathered to tell their stories.

The teacher at Sacred Heart's one-room school house was rumored to be a member of the Ku Klux Klan, so Tony's parents sent him and his brother, Barney, to St. Mary's Academy, a school for Potawatomie Indian girls near Asher, Okla. It was at St. Mary's that he developed a lifelong respect for Indian culture and an appreciation of what it means to be an outsider in your own land.

In 1943, he interrupted his education at the University of Oklahoma to join the Army. He lugged his mortar ashore at D-Day with the 103rd Infantry Division and was severely wounded in battle at Alsace, France. He returned from Europe a genuine war hero with a Silver Star with Oak Leaf Cluster, temporary blindness and two shattered legs that never stopped causing him pain.

He returned to the university for his degree and, in 1948, married Marie Unzer. Together, they raised six children, five of them adopted.

As a young man, he farmed, drove a truck, toiled as an oil field roughneck and worked as a reporter and editor for the Borger News-Herald in Borger, Texas; the Morning Press-Constitution in Lawton, Okla.; United Press International in Oklahoma City; and the Santa Fe New Mexican, where he rose to executive editor. He quit in 1962 to earn a master's degree from the University of New Mexico, where he later taught journalism and eventually became chairman of the journalism department. In 1993, he was inducted into the Oklahoma Journalism Hall of Fame.

Hillerman was still teaching when he wrote his first novel, "Blessing Way." A story that always made him chuckle: His first agent advised him that if he wanted to get published, he would have to "get rid of that Indian stuff."

Hillerman is survived by his wife, Marie, and their six children. Services are pending.

Hillerman was one of my heroes. I loved his series, and especially listening to his voice on audio tape. It's not surprising that he was a war hero. There was just something very strong and true and pure about him, which came through in his stories. I'm desloate that there will be no more Jim Chee and Joe Leaphorn books. Hats off to a fantastic talent.

And isn't it funny - some of the worst advice we get about our books ends up disparaging that which our readers find the most endearing about us. A lesson to be learned - stay true to yourself and don't get sideswiped by one voice of doom.

"And isn't it funny - some of the worst advice we get about our books ends up disparaging that which our readers find the most endearing about us. A lesson to be learned - stay true to yourself and don't get sideswiped by one voice of doom."