Two years ago, Portia Lamont disappeared from a small town in Vermont, devastating her parents and sister, who spent every waking hour searching for her. When she suddenly shows up on their horse farm in a stolen truck with a little mutt on her lap, they want to know what happened. Was she taken? Or did she run away?

Aaron Paul Lazar is obsessed with writing. He's completed twenty-six books to date, and has earned nineteen literary book awards. He writes mysteries, suspense, love stories, and more. You'll usually find him writing his heart out in the early hours of the day - preferably in the dark, quiet hours when no one else is awake in his bustling household. 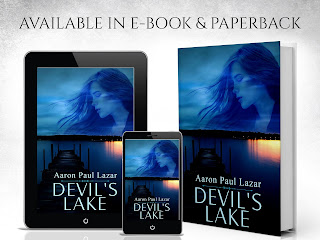 Using Exclamation Points in Your Novel! by Aaron Paul Lazar

One of the first errors I learned about as a novice writer had to do with the use of exclamation points. After penning my first novel -- fortunately before publication -- I was informed by a writing guru that exclamation points don’t belong in one’s narratives. Period.

Here’s an example of very amateurish writing where exclamation points abound. This is not okay! (I just had to put an exclamation point here to make you smile.) It’s actually very similar to several newbie manuscripts I was asked to critique.


She walked into the crystal cave and cried out. In front of her stood a giant elf! He was huge! And his eyes burned with fire!
She turned and ran as fast as her legs would carry her, and almost fell!


All right, now that you are cringing (I hope), I will stop. A few years ago, I actually edited a manuscript where there were multiple examples like this on every, single page, all throughout the book. Yup. But my young authors learned, just like we all did, and they dutifully removed those offensive punctuation marks.

Shelby held a silver chain to the light. A heart-shaped crystal dangled below, winking in the winter sunlight. “Look what Uncle Sig bought me!” she said.

Camille jumped up to examine the necklace and Johnny roared into the room, “flying” his rubbery metallic green dragon toward me.
“My dragon flies!” he yelled, zooming it up and down in the air and finally landing it on my shoulder.
“Wow. What’s his name?” I peered down at the realistic reptile who perched on me.
“I dunno,” he said. “How ‘bout…Claws?”
I picked up the squishy critter and looked at him. He did have very distinctive claws and a rubbery mouth that opened when you pressed on the skull. “Claws is a good name, buddy. I like it.”
“Can he come to dinner with us? He’s really hungry!”
Camille fastened the necklace around Shelby’s neck.
I handed Claws back to Johnny. “Sure he can. Do you have to use the bathroom before we go?”
“Yes!” he squealed, holding two hands in front of himself and dancing in place. “I do!”

Okay, so the little boy and his sister in the above segment are really, really excited. And it’s probably okay to sparingly use exclamation points in their dialog. In the highlighted areas above, such as those with the dialog tags “yelled” and “squealed,” they are sufficiently clear to let the reader know the boy is being very loud. I would remove the exclamation marks from those segments, at minimum. Frankly, I think one or two per chapter is more than enough. You can show excitement in many other ways, especially by using action beats.

For example, you might say, “He shrieked and ran in circles, arms flapping like an airborne chicken.” Or something equally as silly. ;o)

Remember, as a general rule, avoid exclamation points in narrative, and use them very sparingly in dialog. You don’t want to get the same highbrow lecture I did when I was a newbie, do you?

Now, how do you handle someone shouting in your novel? How about when it’s an inner thought?

What if your character has just stumbled upon the dead body of the one he loves?

(As you know, all inner thoughts are generally shown in italics, except where you use, “he thought,” etc.)

I have seen at least three methods to show this:

Some folks use upper case to stand in for exclamation points. I’ve used that approach a few times in my own work. What do you think? List your comments below, and if you have any examples you’d like to discuss, feel free to post them in the comments section.

Remember to take pleasure in the little things. And if you love to write, write like the wind!

Posted by Aaron Paul Lazar at Saturday, October 08, 2016 No comments: